You are at:Home»Current in Carmel»Carmel Community»Bear Creek selected as name of new park in northwest Carmel 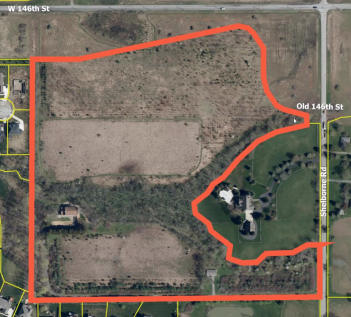 Bear Creek Park is on nearly 27 acres on the southwest corner of 146th Street and Shelborne Road.

The Carmel Clay Parks & Recreation board on Nov. 10 approved Bear Creek Park as the name of 27 acres of land on the southwest corner of 146th Street and Shelborne Road.

Bear Creek, a small tributary that flows into Little Eagle Creek near the western border of Carmel, has its headwaters on the east side of the park. CCPR plans to incorporate the creek into its development of the park, which isn’t expected to open to the public for two to five years.

Previously the land had been known as Northwest Park, but with other parks with a similar sounding name in Central Indiana CCPR officials wanted to select a different name.

The $2.13 million purchase of the land from sellers David and Beth Bidgood was contingent on an amenity in the park being named after “The Carter Family” in honor of Beth Bidgood’s family, who purchased the property many years ago. The name could be used on a pavilion, playground or other amenity, but it hasn’t been determined yet.

CCPR expects to spend at least $6.5 million to develop the park. The first step is to create a park master plan, a process that typically takes nine to 12 months.