You are at:Home»Current in Carmel»Carmel Community»Planning resumes for ecology center, Carmel parks along White River 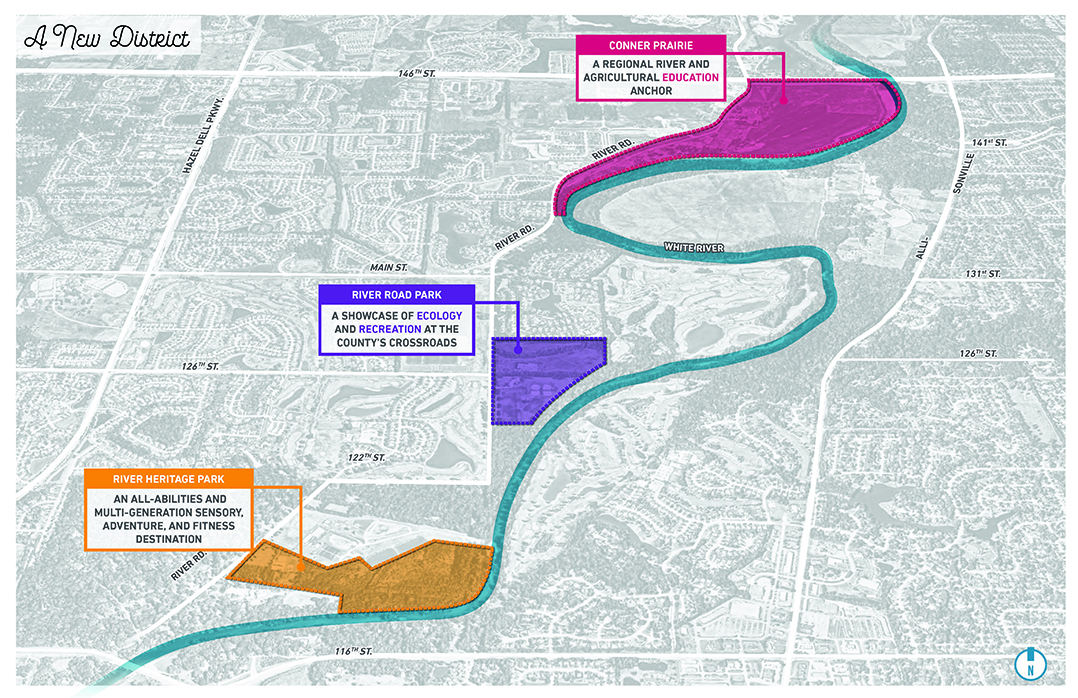 Like many projects in the works this spring, the Hamilton County South River District Study, part of the White River Vision Plan, came to a halt as the COVID-19 pandemic gripped the nation in uncertainty of many kinds.

But now that the pandemic’s impact is better understood, the study is again moving forward. The planning team presented an update on the study and an overview of its results thus far during a Nov. 9 webinar.

The White River Vision Plan is a joint effort between the City of Indianapolis and Hamilton County Tourism, Inc., in partnership with Visit Indy’s philanthropic arm, Tourism Tomorrow, Inc., to develop a comprehensive plan to enhance the river’s presence along its 58 miles in the two counties.

The river district study is funded by Hamilton County Tourism, which is expecting a 42 percent decline in revenues this year because of the pandemic. The study was expected to end in May, but after the delay, it’s now projected to wrap up by January 2021. The study results will provide guidance for entities that own parks and other amenities along the river so they can develop them in a cohesive and connected manner.

In Hamilton County, the river district study took a look at River Road and River Heritage parks in Carmel and Conner Prairie living history museum’s more than 6 miles of riverfront in Carmel and Fishers, which is proposed to include a river ecology and education center.

Eric Lucas, principal architect at MKSK, said the steep slopes and wetlands near the site of the proposed ecology center could lead to the building being constructed in pods rather than being a single, large mass. Planners are considering three options for the center, ranging in size from nearly 14,000 to more than 37,000 square feet.

“We want this facility to be intimately nestled within the natural environment, but we also want it to capture views toward the river, some of which are very dramatic given the topographic changes,” Lucas said.

Upgrades also are planned at River Heritage Park, a 40-acre park along the White River north of 116th Street in Carmel. Planners want to make the park among the most accessible in the state to people with disabilities by building an inclusive playground, fitness area and other amenities.

“We want to double down on this great heritage of providing inclusivity in this park,” Lucas said. “We also want to broaden this park’s appeal, not only to the west end of the park where it’s developed, but to open up the wooded area for more experiences and adventure that ultimately leads toward the river.”

Other ideas for the park include relocating the parking area and creating a four-season pavilion that can host festivals and other outdoor gatherings.

Plans for the 62-acre River Road Park near 126th Street at the White River include creating scenic overlooks and construction of a pedestrian bridge over the river to connect the trail systems in Carmel and Fishers.

“This park becomes the crossroads of the county,” Lucas said.

Learn more about the White River Vision Plan at mywhiteriver.com.