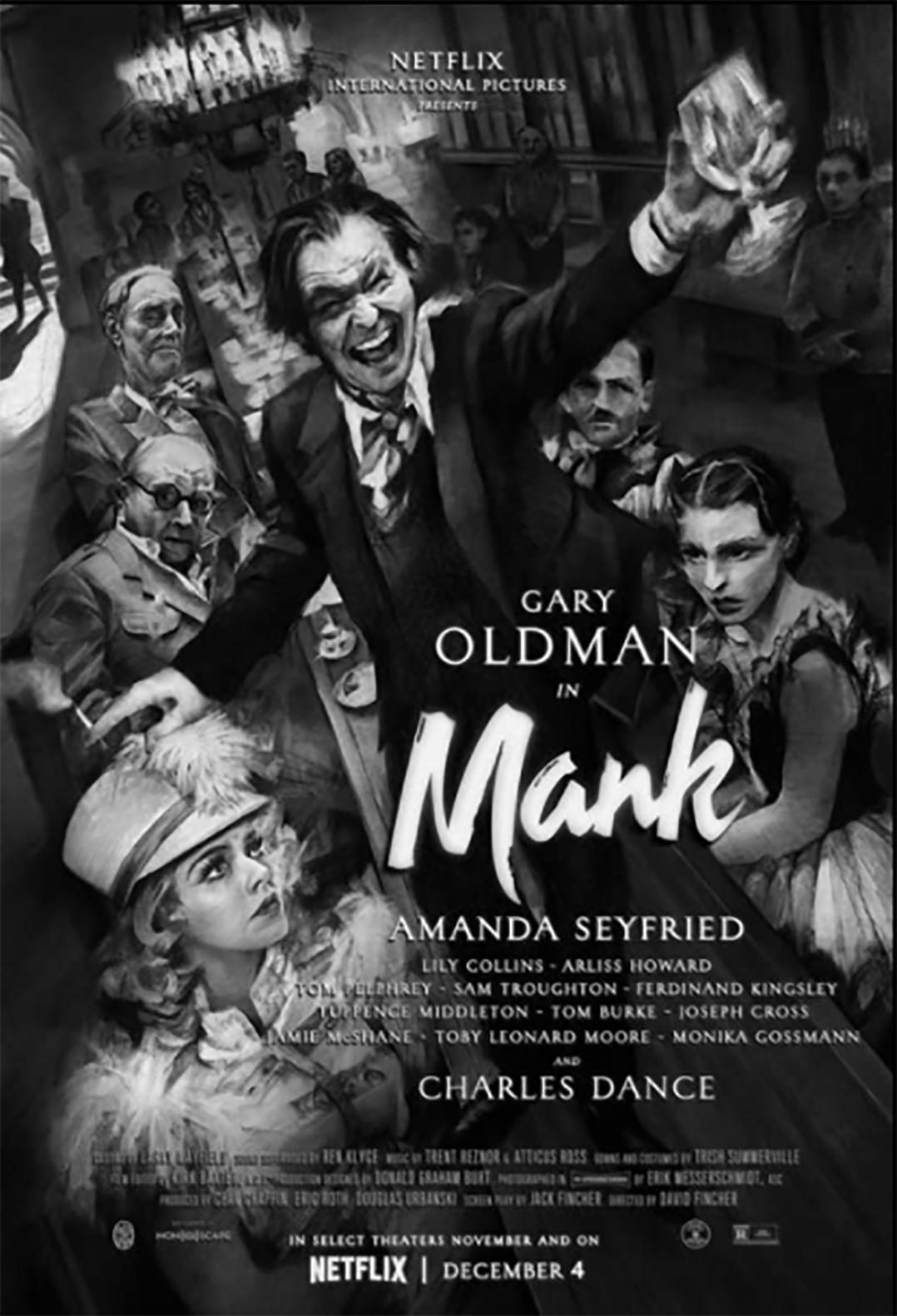 Gary Oldman is a national treasure – or international treasure, as he’s British. My point is this is a man who never turns in a bad performance. He nails every role – from German composer Ludwig van Beethoven in 1994’s “Immortal Beloved” to his Oscar-winning turn as Winston Churchill in 2017’s “Darkest Hour.” In David Fincher’s latest offering, “Mank,” Oldman does it again.

“Mank” is the story of once-promising Hollywood screenwriter Herman Mankiewicz – a washed-up alcoholic by age 40, who then wrote the screenplay for Orson Welles’ masterpiece “Citizen Kane” – often considered the greatest film ever made. That Oldman treads a fine line between portraying Mankiewicz as a comic souse or a pathetic louse is a testament to his acting ability. He somehow manages to find that window of opportunity where we sympathize with him, all the while disparaging the vice that would be his downfall. His performance immediately ranks with those of Ray Milland in “The Lost Weekend,” Jack Lemmon in “Days of Wine and Roses” and Nicholas Cage in “Leaving Las Vegas.”

But unlike those classic films, “Mank” suffers from a missed opportunity, which is its ultimate downfall. First, some background. Unlike most films which overuse the structure of relying too heavily on flashbacks (see the recent Ron Howard picture “Hillbilly Elegy”), “Mank” utilizes them necessarily. There’s nothing more boring than watching a writer write. So, much as with Jay Roach’s 2015 film “Trumbo,” the writer composes his masterwork as we become privy to his backstory via the art of flashback sequences. Here – given the stagnant nature of the writer at work – the flashback architecture works.

So, as Mankiewicz pens what would become Welles’ monumental treasure, we learn of the backstory. Why did Mankiewicz despise publisher and muckraking journalist William Randolph Hearst – the never-quite-acknowledged subject of “Citizen Kane?” While the Jack Fincher (the late father of David) screenplay dutifully fills in these blanks, it leaves the viewer somehow wanting more.

We are treated to a bevy of visitors, each of whom attempts to talk Mankiewicz out of going public with his screenplay – including his brother and (eventually) more successful screenwriter Joseph Mankiewicz (played by Tom Pelphrey), and Hearst’s mistress, actress Marion Davies (Amanda Seyfried). Fast forward to Mankiewicz and Welles receiving the Oscar for Best Original Screenplay for 1941. What’s missing are the scenes of public outcry following the release of “Citizen Kane” – including Hearst’s attempt to purchase the film from Welles to insure it never be shown anywhere. Ever.

The political ramifications abounded, as Hearst was a known supporter of California GOP candidates, while Mankiewicz openly supported the 1934 gubernatorial candidacy of socialist author Upton Sinclair. Perhaps to equate the days of yore depicted in “Mank” with today’s political landscape, Fincher dedicates too much time likening Sinclair to Bernie Sanders and Adolf Hitler to President Trump (noted Republican and Jewish studio boss Louis B. Mayer [Arliss Howard] asks an associate, “What’s a concentration camp?” during a 1934 flashback scene).

I would have preferred more, nee any, attention be given to the initial public reaction to a major motion picture attempting to sully the reputation of Hearst. While Welles gets the credit (or blame, depending on your point of view), it was Mankiewicz who had the axe to grind against Hearst. A different emphasis would have helped “Mank.”  It’s certainly not a bad film – and, in fact, quite entertaining for those with a love of Old Hollywood. It’s simply a missed opportunity.

I love the look and feel of “Mank.” The black and white photography, the clothes, and hairstyles are mirror images of the films produced during Hollywood’s golden age. The crisp dialogue (populated with subtle puns) harkens back to an earlier era of screenwriting. Even the opening credits appear to emanate from a bygone time in filmmaking.

I recommend “Mank” for what it is – a paean to yesteryear, and another stellar performance by the incredible Gary Oldman. But if you’re yearning for an historical account of the public clamor surrounding the release of “Citizen Kane,” you’ll need to look elsewhere. I might recommend a 1996 episode of PBS’ “The American Experience” called “The Battle Over ‘Citizen Kane’” – which deftly provides the missing reiteration of public backlash following the film’s 1941 release.