You are at:Home»Current in Carmel»Carmel Community»Cancer battle inspired incoming Carmel school board member to run for office

The year 2020 has been memorable for Louise Jackson.

In addition to learning how to manage through a global pandemic, Jackson was diagnosed with breast cancer — and beat it. And that unexpected journey led to her run for the Carmel Clay Schools Board of Trustees, a nine-way race for two seats that she narrowly won by finishing with the second-most votes. 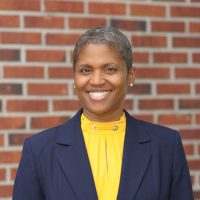 “Having gone through breast cancer this year and COVID this year, it has reminded me there’s no time like the present,” Jackson said. “Whatever you’re putting off in your life that you know needs to happen to help you, help your family or help the community, don’t put that off, because tomorrow isn’t promised.”

The two at-large seats on the school board in the Nov. 3 general election went to incumbent Katie Browning, who received 23.71 percent of the vote, and Jackson, who finished with 12.92 percent of the vote — 68 votes ahead of third-place finisher Anne Poindexter. The count was close enough that Jackson held off on announcing her victory until the votes were certified by county election officials on Nov. 13.

Jackson, who had never run for elected office before, said seeking a school board seat wasn’t even in her mind when the year began. But as she battled breast cancer, she was encouraged to find a way to give back to those around her. As a mother of two students in Carmel Clay Schools and a professional career as a talent acquisition and development consultant, she thought the school board might be a good fit.

“I’ll be able to leverage my experience working on programs where we’re looking at the human resources side of things to understand where the opportunities lie in our district to do even better,” said Jackson, who is believed to be the first African American to serve on Carmel’s school board.

Jackson, who has lived in Carmel for seven years, said she will aim to be a unifying voice on the school board and that she is appreciative to have received votes from Carmel residents of varying backgrounds.

“I love that there were Democrats that voted for me and Republicans that voted for me,” Jackson said. “I have a deep appreciation for our community, and I’m so honored that they would choose me to serve in this capacity.”

Jackson will officially join the board in January 2021. She replaces school board member Lin Zheng, who did not run for reelection.