The Westfield Washington Schools Board of Trustees recently named current WWS director of human resources Chris Baldwin as interim superintendent. Current superintendent Sherry Grate is retiring at the end of the year. 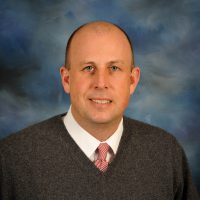 Baldwin will begin his role Jan. 1 and will lead district day-to-day operations until June 30, or until a full-time superintendent is named.

“On behalf of the Westfield Washington School Board of Trustees, I would like to congratulate Chris Baldwin on this appointment,” Board President Amy Pictor stated. “His dedication to this community is unquestioned and we are confident that he will continue to be a valuable resource to our students, staff, administration and families.”

“I am humbled and honored to serve as the district’s interim superintendent,” Baldwin stated. “I’ve spent the last 16 years in service to this school district and this community and I’m looking forward to continuing that work in this new role.”

Baldwin received a bachelor’s degree from Butler University in elementary education, a master’s degree in educational administration from Oakland City University and is currently pursuing his Ed. D. in educational leadership from Oakland City University. Chris is married to Nancy Baldwin, a teacher at Oak Trace Elementary School and they have three children who have all attended or are currently attending Westfield Washington Schools.