A retired rabbi is drawing inspiration from the New Testament to create books for children featuring the parables of Jesus told in an innovative way.

Carmel resident Sandy Sasso, who retired as rabbi at Congregation Beth-El Zedeck in 2013, has authored several books, but some of her most recent endeavors aim to explain popular Bible stories in a way that’s easy for children to understand. 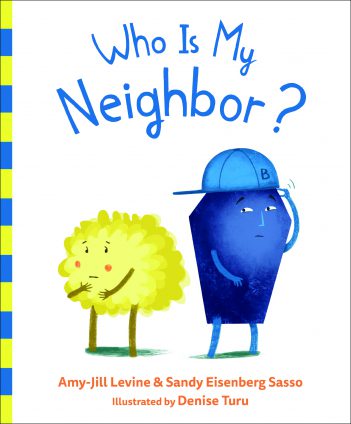 “Who is My Neighbor?” retells the parable of the good Samaritan in a way that’s easy for children to understand. (Submitted photo)

“I believe that children have an innate spirituality and a yearning to discuss the bigger questions of life and that sometimes adults do not recognize that,” she said. “These books aren’t about answers. They are about questions to help have a deeper conversation with our children about what really matters in life.”

Sasso partnered with Amy-Jill Levine, a professor of New Testament and Jewish studies at Vanderbilt Divinity School, to write “Who is My Neighbor?,” which was released in early 2019. The book is a retelling of the parable of the good Samaritan featuring blue and yellow creatures that historically haven’t been able to get along — although they don’t know why.

Through the book, which includes a discussion guide, Sasso hopes to dispel the notion that the priest and Levite who failed to stop to help a fellow Israelite in the parable were merely concerned about purity laws. She said in Judaism, saving a life overrides ritual concerns and that the parable shows that a neighbor is one who, regardless of cultural or ethnic differences, shows care and compassion for another. 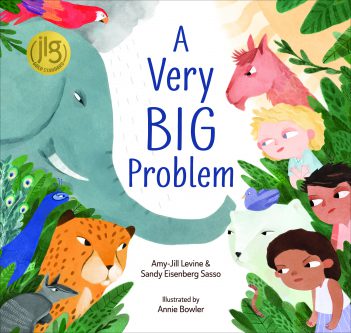 “A Very Big Problem” explores the interconnectedness of creation and God’s love for it all. (Submitted photo)

Sasso and Levine also partnered to write a children’s book inspired by the parables of the lost sheep, lost coin and prodigal son.

Sasso’s most recent book is inspired by a story that appears in the Torah and Old Testament. “A Very Big Problem” was released Aug. 4 and tells the story of creation with a focus on its interconnectedness and God’s capacity to love all of it.

“So often we think as humans we have the right to exploit the earth because we’re more important, but we should have recognized that with climate change we are very much connected to the earth,” Sasso said. “We have to recognize that interconnection, because otherwise there will be no earth.”

Sasso said she tries to focus on unique or unheard voices in her books, which have included a story about Noah’s largely unknown wife and a book in progress through the point of view of animals in Bible stories.

“These stories are very rich, but sometimes the way we share them does not invite children to engage them or find them interesting,” Sasso said. “These stories weren’t written for children. They were written for adults, so how can we tell the story in a way that will engage our children so they can find meaning within these narratives?”

Sasso’s two children are grown, so she turns to her grandchildren for help as she writes new books.

“They give me very honest feedback, like, ‘I think your last book was better,’” Sasso said. “Sometimes they point out things that I didn’t realize. They’re very good editors.”

Sasso’s books are available on Amazon.com.