You are at:Home»Current in Westfield»Westfield Cover Stories»One for the road: Westfield announces preferred route for Ind. 32 widening

“We looked at six different alternatives, and this preferred alternative is the one that meets the goals of congestion mitigation and pedestrian safety and minimizes impacts of historic districts at the same time,” city engineer John Nail said.

Nail said the design will be tweaked in the coming weeks. Current plans show that the Westfield Pharmacy building, the Erika’s building, the BMO Harris Bank building and the Speedway gas station on the south side of Ind. 32 will be impacted due to the route. There also are a few businesses east of Union Street and Ind. 32 that will be impacted. However, some of those buildings already were going to be demolished due to the Union Square mixed-use development.

“If this goes down the path we are headed, the Union Square development between Union Street, Mill Street, Jersey Street and 32, that already has zoning approved by (the) city council, and they are doing preliminary engineering for that development,” Nail said. “That project will already demolish the pharmacy building and all the buildings in that block to redevelop them into the Union Square project.”

The Ind. 32 widening would not negatively impact the Union Square development.

Nail said he expects the project will go to bid in December 2022, with construction beginning in 2023 and stretching into the spring of 2024. Ind. 32 will remain open throughout the project, which will be constructed in two phases. The first phase is for the south lanes, and traffic will remain on the existing Ind. 32. When that phase is complete, traffic will shift to the new construction and allow for the northern lanes to be built.

“The whole thing won’t be completely closed, and we won’t have a detour route for State Road 32 or anything like that,” Nail said. “We will maintain access to all businesses and residences along that route for the entire construction timeline.”

The project is expected to cost $15 million and will be funded by the City of Westfield and the Indiana Dept. of Transportation. Each entity will fund half the project. The interlocal agreement to allow for 50/50 cost sharing was approved in 2018 but planning for widening Ind. 32 began a decade ago.

“We’ve been looking at this as far back as 2010,” Nail said. “We did a corridor study for State Road 32 that looked at the downtown area, and INDOT also started looking at that corridor probably longer than this, but certainly by 2014. Really, it’s been a decade-long study of downtown, and in particular the (Ind.) 32 corridor. We are happy to be partnering with INDOT, and I think both organizations are really excited to move this project forward.

“The preferred alternative is a big step in that process, so we are excited to continue design and getting input from our various groups and get this thing constructed.”

Renderings of the route are expected to be released next week. 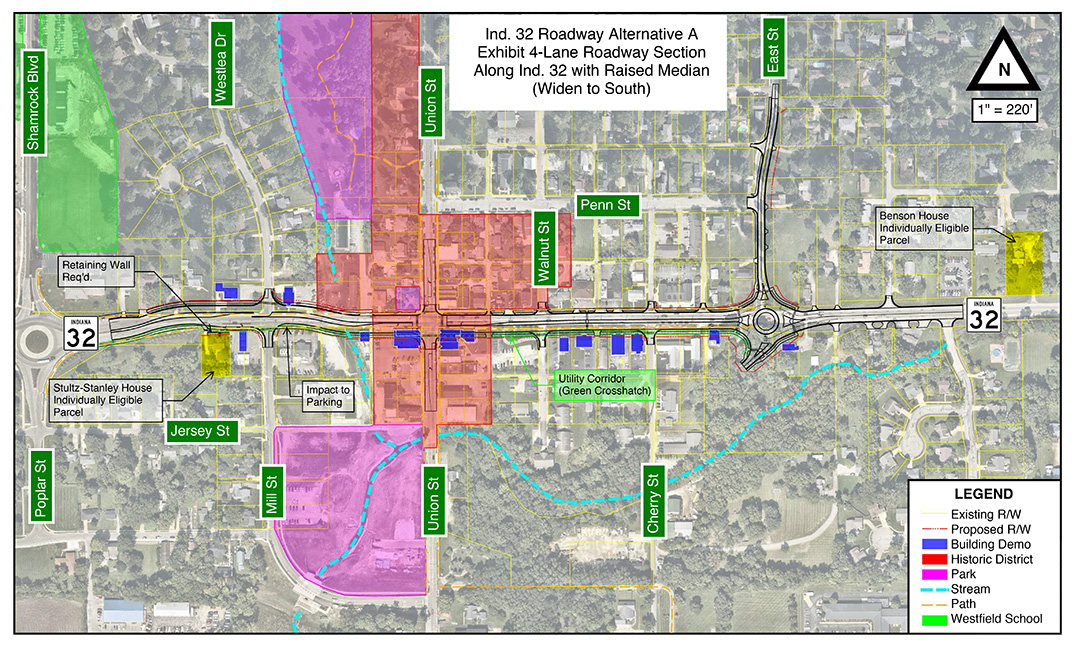 A color-coded map showing which buildings will be affected by the route. The map is subject to change. (Submitted image)

Because the Ind. 32 widening project is using $7.5 million of state funds and passes through the National Register Listed Westfield Historic District, the project must follow the Indiana Historic Preservation and Archeology Act and will be required to obtain a Certificate of Approval from the State Historic Preservation Review Board.

A meeting is anticipated in January, during which interested parties will have the opportunity to offer input on potential mitigation measures to offset the effects the route will have on historic resources.

A Community Advisory Committee meeting and a public information meeting also will be scheduled in the future to provide the public a chance to give feedback and comments on the route.