The Carmel City Council held its final meeting of the year on Dec. 21 to discuss planned improvements at Clay Terrace, a rezone request along 116th Street and other matters. 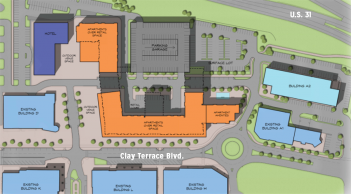 A concept plan shows the proposed location for a hotel, apartments and a parking garage at Clay Terrace. (Submitted image)

What it means: The amendment paves the way for Clay Terrace to add a hotel and parking structure and replace buildings on the southeast portion of the site with four- to six-story buildings with office space and mixed uses. Clay Terrace owner Washington Prime also plans to reduce Clay Terrace Boulevard from two lanes to one in each direction to make the area more pedestrian friendly.

What happened: The council approved rezoning a parcel near the southeast corner of 116th Street and Range Line Road from residential to business use.

What happened: The council introduced proposals for $125 million in bonds.

What it means: The bonds would fund an expansion of the Carmel Police Dept. headquarters, road improvements and redevelopment projects. If approved, they are not expected to raise the city’s tax rate.

What’s next: The council’s Finance, Utilities & Rules committee will review the bonds. A meeting date has not been announced.

What happened: The council unanimously elected its officers for 2021.

What’s next: Finkam and Rider will begin their new roles at the council’s next meeting, set for Jan. 4, 2021.