When U.S. Supreme Court Justice Ruth Bader Ginsburg died in September, Carmel resident Amy Tibesar was hit hard.
“In the circles I run in, it was such a tragic news event,” Tibesar said. 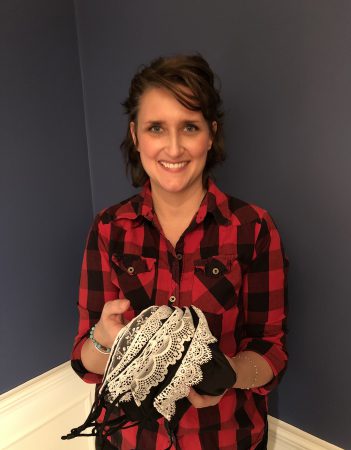 Amy Tibesar pauses with some of her Ruth Bader Ginsburg masks. (Submitted photo)

So, she made 10 Ginsburg face masks for close friends with the expectation they would wear them when they voted in the November general election. The masks are black with a dissent collar at the top, representative of collars Ginsburg wore when she dissented from majority decisions.

“I couldn’t go anywhere without people saying, ‘Is that a Ruth Bader Ginsburg tribute mask?’” Tibesar said.
Tibesar started taking some masks in her purse and selling them for $10. She started advertising on Facebook Marketplace under RBG tribute masks.
She didn’t think she would sell many but decided she would donate all the proceeds to The Julian Center, which supports survivors of domestic and sexual violence.
“Then it took off like a bomb,” Tibesar said. “I’ve been sewing pretty consistently since the beginning of October.”
Tibesar added jokingly, “Had I originally known this endeavor might have paid off some of my student loans, I may have considered only giving 50 percent; but as it is I committed to giving it all, and true to my word, that’s exactly what I intend to do.”
She chose The Julian Center because it is a cause she believes Ginsburg would have embraced.
“Everyone who ordered these masks, is paying homage to, and supports the strong woman that RBG was,” Tibesar said. “I loved knowing these strong women also knew they were supporting other women, who are courageously getting help during a particularly difficult time in their lives”.
Tibesar had committed to making RBG masks through the end of 2020. She has raised more than $8,000 of her $10,000 goal.
“Originally, I sewed 18 hours a day,” Tibesar said. “I could make 40 a day when I was sewing a lot.”
She joked she was so busy she told her husband, Eric, to lose her phone number for two months.
“I told him I’m committed to doing this until the end of the year, so don’t expect me to cook and clean,” Tibesar said. “My house is torn upside down because of this. He’s very understanding and supportive. He needs to be because this place has gone down in flames on account of it.”
Producing RBG masks slowed another project: Making masks for children at Carmel Middle School and Cherry Tree Elementary, so they wouldn’t have to wear the school-issued, flesh-colored masks. Tibesar has a child at each school. She had started making masks for the middle schoolers and then had to stop, but plans to start again soon.