You are at:Home»Current in Carmel»Carmel Community»Friends remember Carmel man killed in hunting club fire as ‘larger than life’ 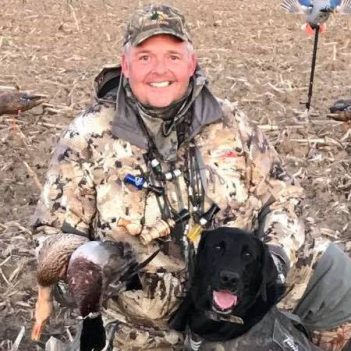 Rob Delaby and his hunting dog, Buck, died Dec. 17 as a result of a fire at Gumz Hunting Club near Henderson, Ky. (Submitted photo)

Gumz Hunting Club near Henderson, Ky., was a “happy place” for Rob Delaby, a respite from the daily hustle of running a business and his many other commitments, according to his friend and business associate Clark Cutshaw.

“He went down there quite a bit to think about strategy for his business and get away to clear his head,” said Cutshaw, a Westfield resident. “That was a very big passion, hunting and his dogs.”

On the morning of Dec. 17, the hunting club also became the site of Delaby’s death. Firefighters discovered Delaby, 50, and his hunting dog, Buck, dead inside a small structure that had caught on fire. Investigators are still working to determine the cause of the blaze.

Delaby, a Carmel resident, was the owner and creative architect of Oasis Outdoor Living and Landscapes in Fortville. Entrepreneur David Decker was introduced to Delaby through work and soon became a good friend.

“He had this aura and energy about him. He always had a smile. He’d do anything for anybody,” Decker said. “He would give the shirt off his back in a heartbeat and not ask a question.”

Delaby was known for his fundraising initiative. Susan G. Komen Central Indiana named him 2015’s Pink Tie Guy after he raised more than $23,000 for breast cancer research. He continued to support those efforts through the Twisted Pink Foundation.

Cutshaw said Delaby had a personality that was “larger than life” and that he didn’t hesitate to let others know how much they mattered to him.

“One of the biggest things I try to take from him and carry through my life is that he wasn’t afraid to tell you he loved you or send a note and tell you what he thought about you,” said Cutshaw, who recalled hours spent enjoying cigars and bourbon outdoors at his home with Delaby as among his favorite memories of his friend.

But more than anything else, Cutshaw said Delaby loved his family. Delaby and his wife, Tricia, had been married for 24 years and had two children.

“His daughter and son and wife were the sparkle in (his) eye,” Cutshaw said.

Delaby graduated from Avon High School in 1989 and received a bachelor’s degree from Indiana State University in 1994. He attended St. Elizabeth Seton Catholic Church in Carmel, where a mass of Christian burial was held Dec. 23.