You are at:Home»Current in Geist»Geist Cover Stories»Looking ahead: New fire station, cultural campus planned in 2021

Lawrence Mayor Steve Collier said he expects COVID-19 restrictions to remain in place for the first quarter of 2021, but that after that, the City of Lawrence might return to normal.

“What I expect to have happen as the vaccines role out by the end of February, 80 or 90 million people will be vaccinated by that time, so we will begin to return to normality,” Collier said.

The return to normal will likely lead to a host of rescheduled events taking place at the same time.

“People are going to reschedule events as early as they can, but that might be competing with others who already have scheduled events,” Collier said. “Everybody is facing the same problem, and I would anticipate we will become uber busy once we begin to remove restrictions. Something will be going on every weekend and weekdays, too.”

Some of the major events in Lawrence in 2021 include the opening of the Arts for Lawrence Fort Harrison Cultural Campus, an arts and cultural campus constructed with funding from a Lily Endowment grant.

“The cultural campus has plans to be completed sometime in late March or April, and it is hoped by most that they’ll be done with the pandemic (winding down) but we will wait and see. There’s no hard date for that,” Collier said.

The city recently broke ground on the 80-room Hilton Tru hotel at 9135 Otis Ave. Construction will continue into 2021. 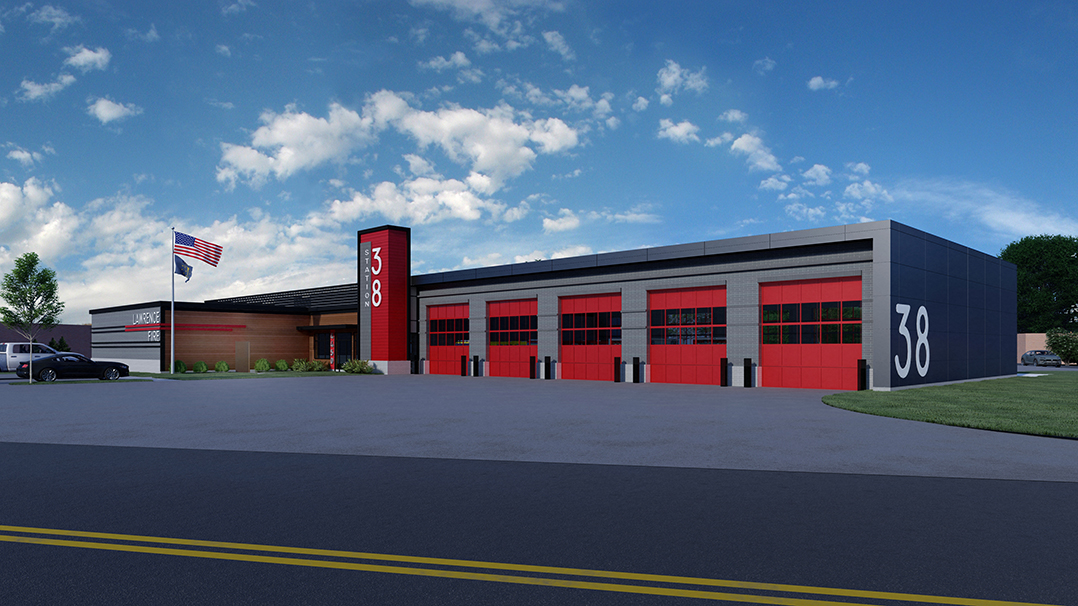 Station 38 on McCoy Street will go through a demolition process and be rebuilt. (Submitted renderings)

Earlier this month, the Lawrence Common Council was informed of plans for the Lawrence Fire Dept. Station 38 on McCoy Street. The McCoy Street station is the oldest in Lawrence. The station will be demolished and rebuilt.

“It was built when we were still a volunteer fire department,” Collier said. “It was not built to house a 24/7 crew.”

The new station will be built on the same site.

“Next to it is the old dispatch, and that will be all demoed,” Collier said. “The footprint for the new Station 38 will be the same as what we see now for 38 and the dispatch.”

The Station 38 crew will be primarily housed at Station 40 during construction.

“We already have made plans to keep that crew fairly mobile, and we will still have four fire crews ready to answer any kind of call,” Collier said. “It’ll be a bit of a pain for them to be moving around.”

Construction will begin in April and last 10 to 12 months.

The city also will continue its infrastructure improvements in 2021 by replacing all the old sewer and storm sewer lines. Collier said paving and road reconstruction will slow in 2021.

Among other 2021 projects, the City of Lawrence also plans to transform its Community Park.

“We are consolidating the two baseball leagues into a new, updated facility, and probably over the course of four to five years spend in the neighborhood of 5 or 6 million dollars,” Collier said.

Lee Road Park will be repurposed to add more greenspace, trails and appeal for people 55 and older. Amenities will include pickleball and shuffleboard courts.