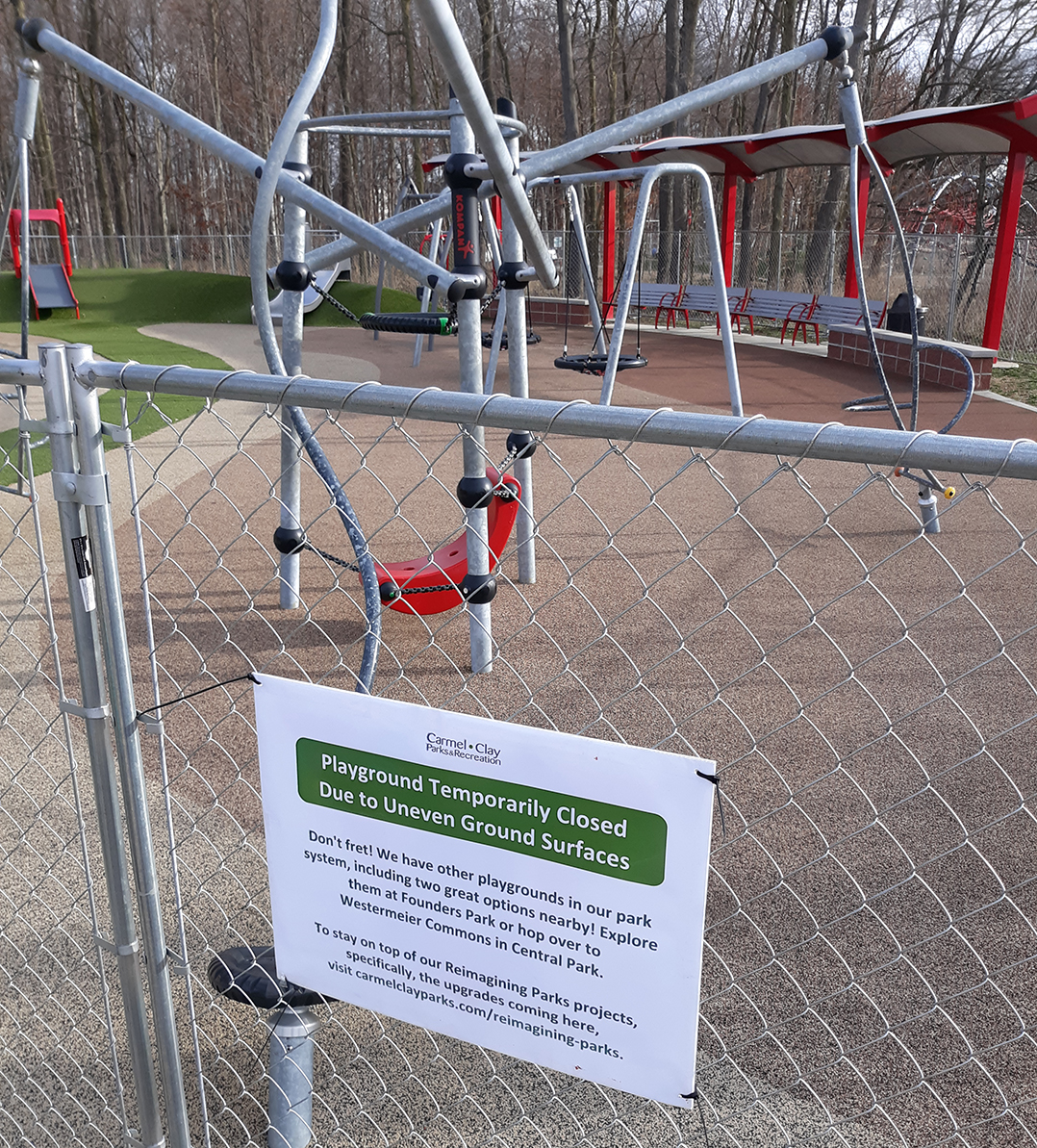 The playground structures at Lawrence W. Inlow Park are closed because of a trip hazard. (Photo by Ann Marie Shambaugh)

One of Carmel’s newest playgrounds is closed because of a trip hazard and is not likely to reopen before fall.

Carmel Clay Parks & Recreation on Dec. 21 closed the three playground areas at Lawrence W. Inlow Park, which is on Main Street east of Hazel Dell Parkway. The play structures opened to the public in mid-2019.

“The rubber playground safety surfacing has developed some abnormalities that CCPR believes could pose a trip hazard to users of the playground,” CCPR Assistant Director Kurtis Baumgartner said. “We are working with several contractors to find an adequate solution that will provide users a high-quality, safe experience while visiting the park.”

Baumgartner said the issues first appeared last winter but that CCPR worked with the vendor that installed the surface to rectify the issue.

“A proposed solution was attempted this spring and worked well through the summer and fall until it was rediscovered while inspecting the park several weeks ago,” he said.

Baumgartner said CCPR doesn’t yet know what led to the recurring problem or what the cost will be to fix it.

“It’s too early to tell exactly what the issue is,” he said. “More than likely it had something to do with the installation and/or materials, but we’re not sure we can say for sure yet.”

The problem can only be fixed during warmer weather, so the playgrounds will remain closed throughout the winter months. Inlow Park is set to receive $2.5 million in upgrades to its splash pad and restroom facility this spring, and CCPR expects to reopen the playgrounds when the other improvements are complete this fall.

CCPR is encouraging the public to visit nearby Founders Park and the soon-to-open Carey Grove Park playgrounds during the Inlow Park closure.

This isn’t the first time CCPR has found safety issues at Inlow Park. In 2017, CCPR removed one of three wooden playground pods after a routine inspection found structural concerns. The existing playground features replaced the wooden ones, which were built in 2001 and 2002.