You are at:Home»Current in Geist»Geist Cover Stories»For the love of beer: Couple talks Taxman Brewing adventure

Working in the tax industry led Nathan and Leah Huelsebusch to Belgium, and ultimately to starting their own brewery.

“I was an accountant and did tax work, and tax work took us abroad and we lived in Belgium for three years,” said Nathan, former international tax director for Cummins.

Sharing a love for craft beers, Nathan and Leah, began visiting Belgium breweries. Prior to that, they had experimented with homebrewing. After moving to Belgium, they visited the breweries, learned about different styles of beer and began homebrewing in a friend’s basement. The main difference in Belgium beer is yeast.

“There are four key ingredients for beer – barley, yeast, hops and water,” Nathan said. “The yeast is different in the Belgium beer. American beer features more hops and grains and the yeast is for fermenting and converts the sugar to alcohol. Belgian beer has this concept called esters, or flavors created during fermentation, and it has more of a flavor drive from the yeast.”

Upon returning to America in March 2011, the Huelsebusches began tweaking their recipes. They opened Taxman Brewing Company in Bargersville in 2014.

“That’s why all the beers are Belgium-themed,” Nathan said. “Taxman is inspired by tax work, and just to have fun we play off the death and taxes theme. The skull with the top hat and bow tie is Uncle Sam meets the Grim Reaper.”

Following the brewery in Bargersville, Nathan and Leah opened a tap room in Fortville in 2016 and one in downtown Indianapolis in November 2019.

“Fortville was an interesting one,” Nathan said. “A long time ago, we did a Bastille Day Festival, and the only time we came to Fortville was for that festival. It turned out a friend owned this building and they reached out (and) said it was going to be empty. He wanted to bring something to the Fortville community that would bring residents to want to live here.”

The Bastille Day Festival celebrated French culture, and the Huelsebusches served beer at the festival.

The building at 29 S. Main St., Fortville, previously housed a print shop. The Huelsebuchses began the process of buying the building when the building next door went up for sale, so they bought both and combined them, leading to a massive, 12,000-square-foot taproom with two event spaces upstairs.

Each of the three restaurants can seat more than 200 people, which has become a blessing during the restrictions due to COVID-19.

“COVID has restricted us, but we are still at a 100-plus people capacity,” Nathan said. “We can space everybody out is the most important thing, but also to not have to reduce the restaurant size to the point where it’s not a viable business anymore (is important).”

Taxman brews 50 to 60 different beers each year. Many have won awards. The staff consists of two full time brewers and a head brewer. Nathan is the CEO.

“We still love beer,” Nathan said. “I like it more as a consumer product now, though.”
Although he’s not involved in brewing, Nathan does weigh in on the beer recipes.

“Commercial brewing is much easier than homebrewing with all the equipment. You have hot water on demand, and it’s a much easier process,” Nathan said. “I weigh in on recipes and the water profile. A big portion of beer and the way beer feels in your mouth is what goes into water composition.”

Belgian beers are higher in alcohol. A similar event to prohibition occurred in Belgium in the early 1900s and liquor was banned. During that time, Belgian beers began having higher alcohol content. 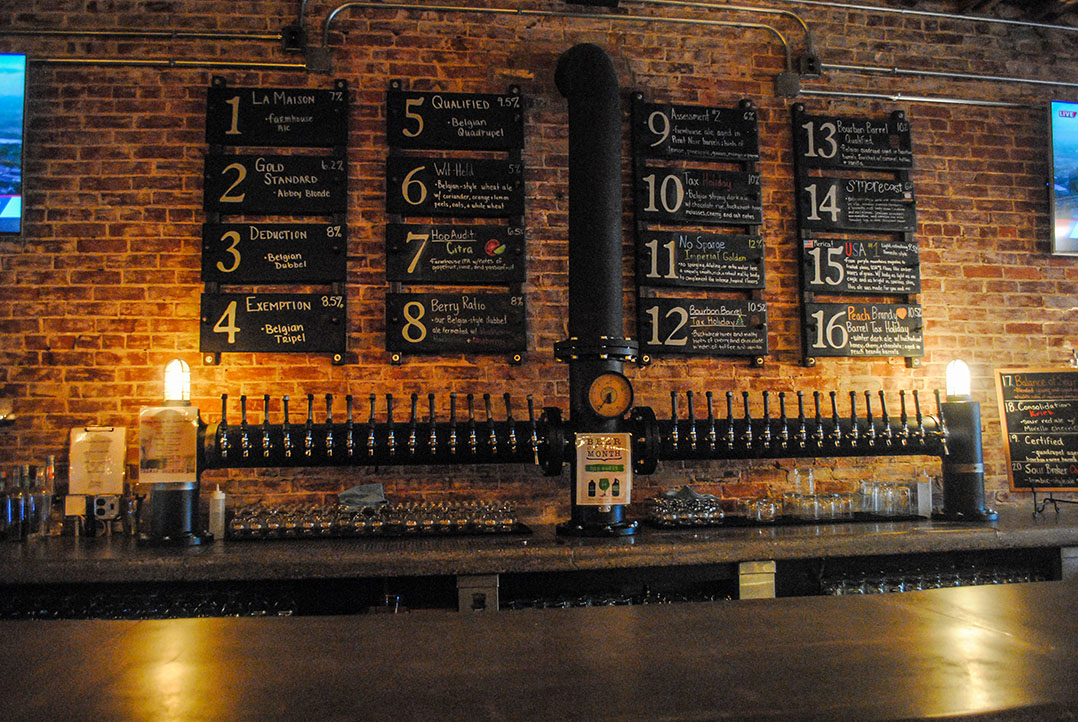 Nathan and Leah Huelsebusch renovated a building in Fortville to create a tap room.

The journey for remarkable food

The Huelsebusches’ original plan was to offer a brewery and then work with food trucks to provide food service, but the idea changed when that wasn’t an option in Bargersville.
So, they decided to open a restaurant along with the brewery. Nathan and Leah said they failed to estimate the demand for food.

“We didn’t have enough equipment and the design wasn’t for the right volume,” Nathan said. “We went on a two-hour wait and had 2,500 people the opening day in Bargersville.”

“We learned a lot with trial by fire,” Leah said. “Running a restaurant is so much more different than running a brewery. It’s a completely bigger operation and more people.”

Now, each of the three tap rooms offers a slightly different menu with quarterly updates. Taxman partners with local farmers to acquire the produce.