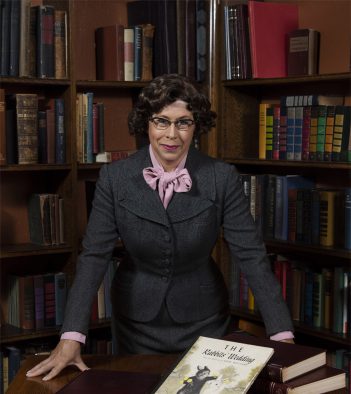 The Actors Theatre of Indiana co-founders figured the climate from the 2020 protests over racial injustice presented the right opportunity to revisit its 2019 production of “Alabama Story.”

With the pandemic curtailing live performances, ATI is presenting a pay-per-view stream of a recorded performance from Jan. 18 to Feb. 14.

The play, written by Kenneth Jones, is based on the true story of a state senator who wanted the Alabama Public Library to remove a children’s book, “The Rabbits’ Wedding,” which depicts a black and white rabbit getting married. The legislator believed the book promoted interracial marriage and wanted the book banned.

“There will always be racists in this country and around the world spreading hate,” Collins said. “The year 2020 brought much of that to light, as did the Civil Rights movement, opening the eyes of some and further closing the eyes of others. Through education, patience and persistence, good will prevail over evil.

“It is always important to keep the conversation alive in regard to racism, not to cover it up, not to pretend it doesn’t exist in your community. ‘Alabama Story’ shows us all of these things.”

Collins said it was an important role for her for many reasons, including bringing a real person to life on stage who did everything within her power to stop the banning of a book.

“In her way, Emily Reed fought a very difficult battle against a very racist community,” she said. “This was a woman in 1959 in the South fighting white men, white men in power. To me, that is always significant. As an actor, I was honored to portray her and relish in roles like this, written so beautifully by playwright Kenneth Jones.”

Maeghan Looney, who is based in Chicago but living in Ft. Wayne during the pandemic, played the role of Lily, a white woman who reconnects with a Black man she knew as a child.

“I was moved by the production and by the audience reaction to it,” Looney said. “Many people left with tears in their eyes. Had I been a spectator and not a performer, I still would have thought about this show and its message many times over the course of 2020.”

Looney said the subject matter is important to examine.

“Our world view is shaped by our own experience,” she said. “You can be deeply empathetic and still not fully comprehend the impact of an experience until you’ve lived it. The events that ignited the explosive outcry over racial inequality in America this year were not isolated. Racism didn’t go away after 1960. More than once, a patron leaving the auditorium relayed how connected they felt to my character, Lily, and I think most of us were Lily this year, overwhelmed, wanting to help but not sure how.

“But like her, we were all given opportunities to listen, take initiative to educate ourselves to not turn a blind eye because it was more comfortable, and to examine how our own behavior might not represent the best of us. Yes, I believe things will hit differently upon a second viewing after the events of this year, and I hope the lessons there continue to inspire growth.”

Sam Arce, a Broadway investor and Carmel resident, saw the opening night show of ‘Alabama Story’ and was moved.

Arce said ATI co-founder Don Farrell’s performance as the segregationist senator was remarkable because the role so far removed from who he is.

Arce was reminded of growing up watching Alabama Gov. George Wallace, a segregationist.

He plans to watch the performance with his son, Sammy, a Carmel High School freshman.

“I think it will be just another good learning point for him,” Arce said. “Nowadays, it’s important we have these discussions. You could see a lot of emotions when people were talking to the cast after the show.”

Arce hopes the production can made available for schools to view.

“I think it would be a great learning tool in the latter parts of middle school and high school,” Arce said.

Arts advocate Frank Basile supported the play’s message in a November 2019 speech at the grand opening of the building housing the Kurt Vonnegut Museum and Library, pointing out how Vonnegut advocated against literary censorship and supported social justice.

A fan of ATI musicals, Basile said he was surprised to learn ATI was doing the serious play.

“My wife Katrina and I attended the play, not knowing what to expect,” Basile said. “We were absolutely stunned and moved by the superb acting of the ATI players. I am happy to see that the play will now be streamed since it addresses a topic that is even more relevant today.”

Tickets are $35. For more, visit atistage.org.