Hotel Tango operators and Boone County and Zionsville officials celebrated the grand opening of the company’s third tasting room in Zionsville Jan. 14, the culmination of a project to cater to the company’s target market while expanding its footprint in central Indiana.

“We kind of played around with the idea of what is now our third tasting room for a long time,” said Ginger Barnes, Hotel Tango’s vice president of operations. “What attracted us to Zionsville was that it is very much our demographic. It’s young professionals, young families. Then it also has a smattering of older folks and retirees, and that’s a great demographic for us to hit. What we loved about Zionsville is it still so quaint. It’s super approachable. It’s not a stuffy place to live. We felt this was a really good home for us.”

After years of dabbling in distilling his own whiskey, Travis Barnes, who is Ginger’s brother, and his wife, Hilary Barnes, decided to create Hotel Tango. Travis, a U.S. Marine Corps veteran who completed three tours in Operation Iraqi Freedom, and his wife named the company in a nod to the NATO phonetic alphabet and the first letters of their first names: Hotel for Hilary and Tango for Travis. The couple opened the company’s Indianapolis location in Fletcher Place in 2014. 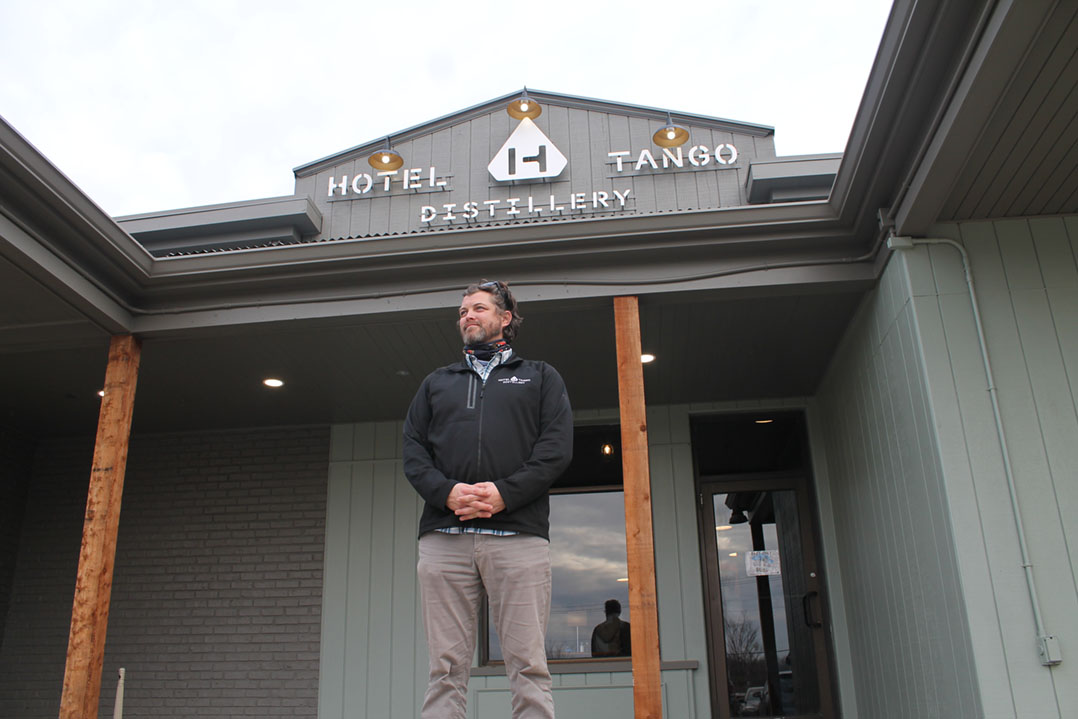 Travis Barnes, who founded Hotel Tango with his wife, Hilary, pauses in front of the company’s new Zionsville location. (Photo by Jarred Meeks)

The company’s Fort Wayne location was independently launched by the company’s vice president of sales and his wife before being purchased by Hotel Tango within the past year, Ginger said.

Hotel Tango’s Indianapolis location was originally envisioned as a production site with a small tasting room where people could sample spirits.

“People don’t want to come in on a Tuesday afternoon and do straight shots of vodka or moonshine, so they would ask for mixers and things like that,” Ginger said of the company’s first months in business.

“All of our cocktails are made from scratch,” Ginger said. “We make all of the simple syrups, all of the infusions. Every ingredient that goes into the cocktail, we make from scratch.”

At the start of each season, with help from bartenders and staff, Hotel Tango creates a new drink menu. Bartenders submit ideas for unique drinks they’d like to see on the menu. For example, a bartender suggested a drink containing banana and papaya this winter, and a kitchen manager took the ingredients, added cloves and created a simple syrup that is now used in a number of the company’s current drink offerings.

The Zionsville tasting room will feature a rotating seasonal drink menu that will be similar to the company’s other two locations. The Zionsville location also feature’s the company’s most robust offering of food among its three locations, Ginger said. It will specialize in what company officials called “elevated pub food,” with each menu item incorporating one of the company’s spirits in some way, whether it is an ingredient or sauce mixture.

In addition, the nearly 4,000-square-foot Zionsville location will include a dog-friendly outdoor patio, a valuable amenity during the uncertainty of the COVID-19 pandemic, company officials said. Ginger said the company hopes enclosed vinyl walls for the patio will help better utilize the space during the cold winter months.

The Zionsville tasting room will be open daily from 4 to 11 p.m. Company officials said the site will likely extend its weekend hours at some point the future. Bottled spirits also are sold at the site.

“We just hope that we can offer (a) friendly, welcoming atmosphere with something that’s new, interesting and exciting,” Ginger said. 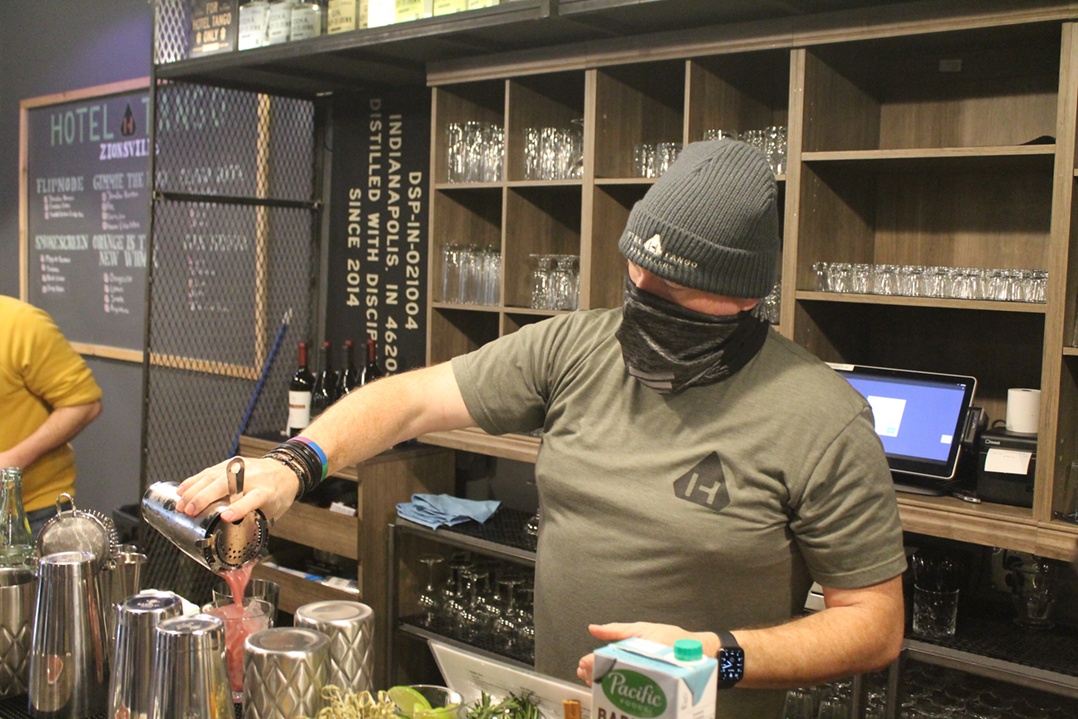 Operating Hotel Tango hasn’t been easy amid the COVID-19 pandemic.

“It’s certainly been a challenge,” said Ginger Barnes, Hotel Tango’s vice president of operations. “I think the biggest challenge has been the uncertainty. It’s the balance of wanting to keep our staff and pay them a livable wage but also keep them safe. And those two things really came into conflict this year.”

Zach Stewart, the general manager of the company’s Zionsville tasting room, applauded the company’s response to challenges posed by the pandemic.

“I’m a firm believer that this is as one-of-a-kind as it gets,” Stewart said. “This company cares about its employees. They care about the community. They care about their customers, and that’s really hard to find during a pandemic, let alone in the service industry altogether. Service industry people are hurting right now, and we all feel very fortunate to be working here with everything that’s going on.

“This company has been able to retain its people, and it’s one of the few company’s that offers benefits to service industry professionals. That’s second to none.”