Jean Sobek was predicted to be the first female U.S. vice president by her senior class.

“But someone beat me to it,” she said with a laugh. 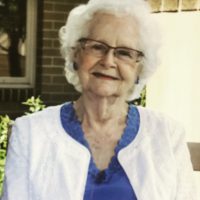 Sobek, 96, has lived in Harbour Manor & The Lodge in Noblesville for 14 years.

Those conversations have been tougher due to social distancing during the COVID-19 pandemic.

“The virus has shut down most of that,” she said. “I never dreamed we’d have a worldwide pandemic, but it happened.”

The Lodge Enrichment Director Stacey Butterfield said Sobek has been a resident since The Lodge opened.

“She is soft-spoken, lovely, kind, witty, fun and very gentle and inviting with everyone, especially when we have new members join us,” Butterfield said. “Jean is someone who connects people together. She enjoys including others and appreciates individuality. Differences will not cause dissension with Jean. She will find a way to bring us closer. It is the secret ingredient to holding us together in unprecedented times we are facing today.”

“She has a beautiful voice, too,” Butterfield said. “She’s an avid singer.”

Sobek said there were sing-alongs Saturday nights prior to the pandemic. But she still participates in service projects.

“We worked on a project to make masks,” said Sobek, part of mask of a brigade who cuts fabric for the masks.

Sobek, who was born on a farm in Iowa, graduated from the University of Iowa. She majored in psychology and then worked in sales at IBM until she was married in 1949.

Sobek said she was active in the League of Women Voters.

She was living in Munster when she moved to The Lodge to be closer to her son, Joseph Jr., a Carmel resident.

Sobek’s husband, Joseph Sobek Sr., died in 2004. He was a member of the U.S. Army Air Corps, flying 50 combat missions as a waist gunner on a B-17 in Europe during World War II. After the war, he played basketball at Notre Dame.

Sobek also has two daughters, Christine Sobek, president of Waubonsee Community College in Illinois, and Carol Hyde, who lives in Charlotte, N.C. She has seven grandchildren.