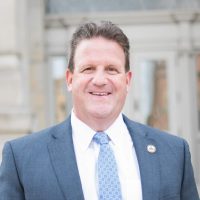 The parking garage, which will be built on a lot the county already owns at 225 N. 9th St. behind Syd’s Bar and Grill in downtown Noblesville, has already received approval for funding four levels, expected to cost roughly $9.5 million. However, the commissioners recently approached the Hamilton County Council requesting funding for a fifth story, which would add $2 million to the price tag. The fifth story has not yet been approved by the council, but the council is expected to vote on it during its March 3 meeting.

Heirbrandt said the garage was always designed to accommodate a fifth level in the future, but recent studies showed the extra space may be needed sooner. If the fifth story is constructed at the same time as the rest of the garage, the county could save $1.5 million in costs versus if it is constructed it at a later date, such as five to 10 years down the road.

Heirbrandt said one of the reasons the commissioners are asking for a fifth level now is because State Rep. Donna Schaibley (R-Carmel) is working on a bill to add another judge to the Hamilton County court system.

“With judges, you typically get juries, and you have to provide parking for that, too,” Heirbrandt said. “With that, we felt comfortable to get additional pricing to add the fifth floor for additional capacity. In the next five to six years, we may need that additional space, so given that fact, we felt it was appropriate to propose (the additional floor) to county council at this time to save cost on construction to do it now, do it right and plan for the future.”

The approved four-story version would create 375 parking spaces. A fifth level would add 100 more. The garage would be open to the public after 5 p.m. and on weekends.

Council member Aaron Smith asked about the timeline for the garage, and Heirbrandt said it’s expected to break ground in May. Construction would finish nine months after it starts. Smith also asked what impact the garage migh have on traffic flow on Ind. 32. Heirbrandt said there likely won’t be much difference.

“(The employees) all have their own ways they travel to go home, and there are some employees that stay afterwards, so it’s really staggered quite a bit,” Heirbrandt said.

Currently, county employees park in several lots around downtown Noblesville, one of which is on the south side of Conner Street. That property was purchased for $4.5 million, and now the City of Noblesville and J.C. Hart plan to develop a $47 million mixed-use development with commercial and retail space.