You are at:Home»Night & Day»Artist Profile»Carmel Christian Church to feature ‘Faces of Jesus’ paintings with messages during Lent

Carmel Christian Church pastor Jerry Zehr wanted to try something unique during the season of Lent. 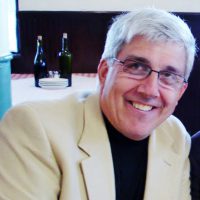 Zehr will be presented the paintings of R. Scott Colglazier, along with Zehr’s message to the congregation. The series of six presentations is entitled “Faces of Jesus” and begins Feb. 21. The series runs each Sunday, starting at 10:30 a.m., through the March 28 Palm Sunday service. The service will be conducted in-person service with face masks required and social distancing. The service also will be livestreamed on Carmel Christian Church’s Facebook page.

Colglazier, a Bloomington resident, is a retired minister who focuses on his art.

“What I appreciate about Scott is he has this insight and depth to his paintings as well,” Zehr said. “I hope it gives people different aspects of what Jesus is feeling.”

Zehr said Colglazier will videotape a segment and give some background about each painting’s meaning. Zehr will then deliver a message on the theme.

“He’s giving insight into some of the aspects of the paintings,” Zehr said. “The ‘Faces of Jesus’ reflect to us some of Jesus’ own issues, some of his reflections and thoughts, especially in his days coming into Jerusalem to Palm Sunday in that last week. It may awaken in each of us how we can connect to that.”

Zehr and Colglazier have been friends for more than 35 years. They met at Christian Theological Seminary in Indianapolis. 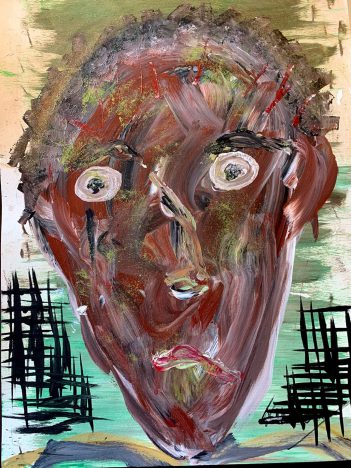 R. Scott Colglazier’s painting “I Just Wanted to Live My Life” is part of the “Faces of Jesus” series. (Submitted photo)

The first painting to start Lent is “I Just Wanted to Live My Life.”

“I think as Jesus was getting ready to go into Jerusalem, he knew a lot of the power brokers were threatened by him and there was part of him that wanted to live a normal life,” Zehr said. “He didn’t want to cause trouble. He didn’t want to be the lightning rod of everybody’s focus. He felt compelled to do this. He wanted to bring this message to say God’s love is there for the untouchable and the gentiles. I think of Martin Luther King Jr. a lot of the same way. Here he was a minister and was probably just, ‘Let me do my thing,’ but he couldn’t deny the call that God was putting on his life. He felt he needed to do something, and he couldn’t just live a normal life.

“So, Scott talks about that in the video as he was painting it. Each painting has a certain meaning to it in some aspect of Jesus.”

For instance, for the “Blue Jesus” painting, Zehr will share a message about mental health. 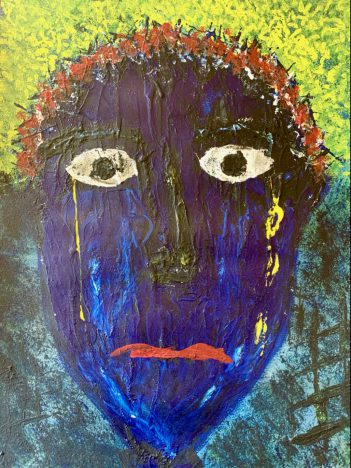 R. Scott Colglazier’s painting of a “Blue Jesus,” reflecting his mood, is part of the “Faces of Jesus” series. (Submitted photo)

“People get the blues and how Jesus must have felt at times, very depressed,” Zehr said. “We see (it) in some of his words when he looked over Jerusalem and he wept. Each painting carries an aspect of Jesus, and I hope it will engage people in a different way.”

Colglazier said he painted the various “Faces of Jesus” over the past couple of years.

“Jesus is such a big and important figure that there are a variety of ways of approaching that and approaching religion itself through art, literature, poetry, theology, all of those things help us grab hold of this big topic of life,” Colglazier said. “It’s kind of an ongoing topic for me in terms of a subject. But mine are nontraditional and much more expressive. It’s not quite abstract but expressionistic. I’m not trying to paint a portrait. I’m trying to present a mood or dimension of Jesus.”

Colglazier said he will be interested to see if the paintings and messages connect with Zehr’s congregation. 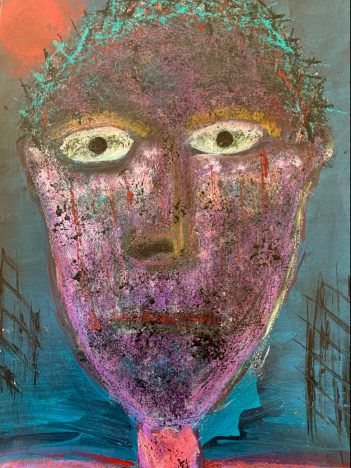 R. Scott Colglazier’s painting of “The Cost of Purple” is part of the “Faces of Jesus” series. (Submitted photo)

“Hopefully, it will provide food for thought and people can think about this ancient figure in a fresh way,” Colglazier said.

Colglazier, originally from Salem, is retired from First Congregational Church of Los Angeles, which Colglazier describes as one of the most progressive churches in the nation.