STARTedUp Foundation’s mission is to instruct students to view life through a lens of innovation and entrepreneurship.

“The biggest theme we have is we want to have students who see problems as opportunities,” said Noblesville resident Don Wettrick, who serves as president of the foundation. “Entrepreneurs solve small problems, whether that’s an event, whether that’s a service or whether that’s an app, whether it’s change you want to see in the world or service is demanded, but (if) no one is doing it, you can do it.”

STARTedUp Foundation is heading into its fourth year. The Indiana Economic Development Corp. wanted to start it and approached Wettrick, who was teaching at Noblesville High School.

“They wanted my help as a consultant and they eventually handed the keys over to me,” Wettrick said. “I was flattered the IEDC wanted a teacher to run an educational program. It’s a nod to Noblesville Schools because they approached us because they heard about the innovation class we had. I’m riding on the shoulders of student giants here because my students were doing great work, and that’s why they called.”

Wettrick taught an innovation class for all four grades at NHS. He was a teacher for 21 years, including his last five at NHS before becoming full time at STARTed Up two years ago.

STARTedUp’s showcase program is the Innovate WithIN pitch competition, a statewide initiative hosted by the IEDC and the STARTedUP Foundation, which is open to high school students across the state. Applications opened earlier this year, and student teams are encouraged to continue submitting video pitches before Feb. 28.

“Innovate WithIN gets Hoosier students plugged in to Indiana’s thriving and engaged entrepreneurial community,” Indiana Gov. Eric Holcomb stated. “This program fosters a pioneering spirit among our leaders of tomorrow, and every year I’m amazed by the innovative ideas these students pitch and the hard work they put into their business plans.”

Innovate WithIN gives students the opportunity to create their own business plans and showcase entrepreneurial ideas throughout the state.

“Through Innovate WithIN, we also run an accelerated program for the finalists as well,” said Wettrick, whose program introduces students to mentors and business leaders.

In 2020, there were approximately 400 students. Wettrick said he expects more than double that total this year, estimating close to 1,000.

“Without a doubt, we are fostering and encouraging teams,” Wettrick said. “What makes this unusual is we don’t split the prizes. So, if a team of three (wins), they all get the same dollar amount.”

The overall winners of the state competition will each receive a $10,000 cash prize, $10,000 toward one year of in-state tuition, college scholarship award opportunities, internship opportunities and mentoring services, among other opportunities.

“We create curriculum basically around innovation and entrepreneurship,” Wettrick said. “We even fund some student ideas and businesses. The Innovate WithIN is a 2 1/2-month program after we name the top 10 teams.”

There are nine regions and a top 10 is named for all nine regions. Virtual regional pitch competitions will be conducted from April 19 to April 30.

“If you win the region, each team wins $1,000 and you get to be part of this cohort,” Wettrick said.

The 10 teams, nine regional winners and one team selected as a wild card take a trip with the STARTedUp team. The trip will likely be to Phoenix this spring.

“The wild card is basically a team that barely lost in its regional,” Wettrick said. “We work with those teams to prepare them for the pitch in June.”

Tentatively, the plan is to have the state finals in-person at the JW Marriott Indianapolis, depending on the state of the COVID-19 pandemic. Last year’s finals were held virtually.

“It ended up being a big success for us because more people were bored and at home last year,” Wettrick said.  “We simulcast it on Facebook Live and that got a lot of views.” 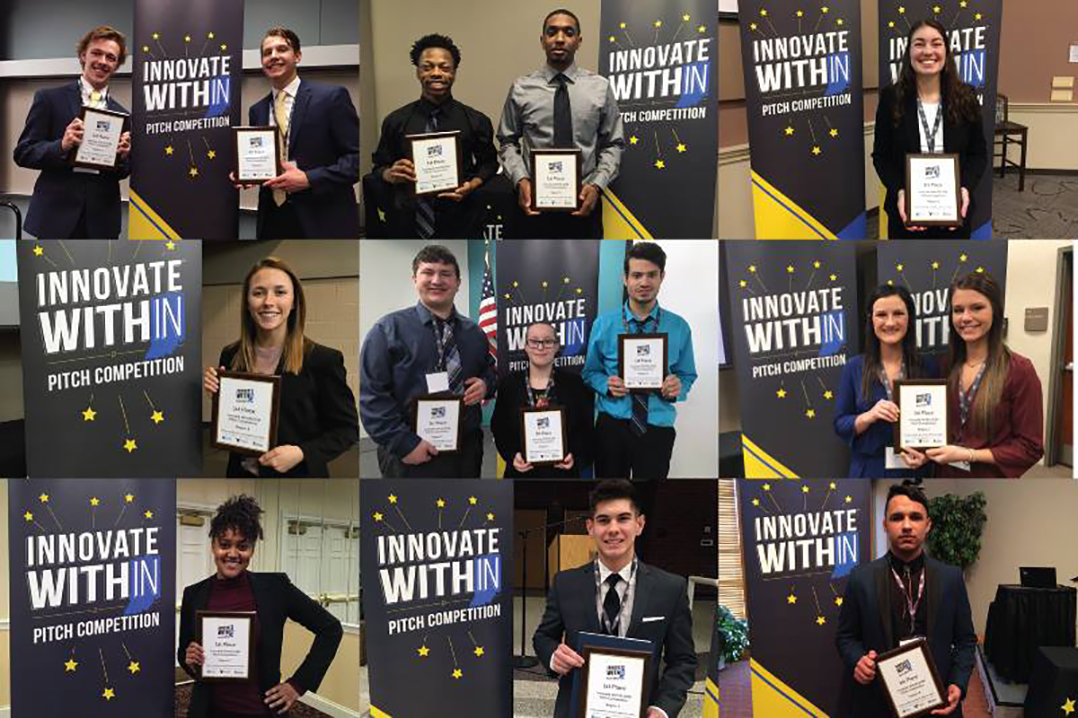 The winners of the first competition in 2018 were 2018 NHS graduates Jackson Ramey and Colin Wareham. An NHS team was second in 2019 and tied for third in 2020.

“All three years, the Region 5 winner has come from Noblesville High School. I’m proud of that,” Wettrick said.

Ramey, a junior finance major at Purdue University, said he wouldn’t have known about the program if it weren’t for Wettrick.

Ramey said he and Wareham were going to do a DECA competition when they heard about the new program.

“But then we thought we’d do this and have the chance to get paid,” Ramey said of the cash prizes.

Educaid was the name of the company that made discovery board games.

“We won the idea with a board game that students could learn entrepreneurship and business education,” Ramey said. “We ended up pivoting in the summer to a card game that was Lemonade Empire. I’m still seeing effects from it. Even though I don’t have a business I’m running now, it’s still in the back of my mind to run them because I’ve seen success from a young age doing the competition. I was able to talk about this a lot at career fairs, and this was one of the main things I talked about to land my internship over the summer.”