You are at:Home»Current in Fishers»Fishers Community»Fishers traffic stop leads to arrest of attempted murder suspect 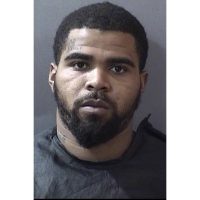 A traffic stop for speeding in Fishers led to the arrest of a Kentucky man who had an active arrest warrant for attempted murder in Kentucky as well as several other warrants.

On Feb. 20, Indiana State Trooper Eric Patterson was patrolling Interstate 69 in Fishers near 96th Street when he saw a vehicle driving 86 miles mph in a 65 mph zone. After stopping the vehicle, Patterson discovered the driver, Corvonte Lynum, 25, of Louisville, had active arrest warrants.

A vehicle search found two loaded handguns, which led to preliminary charges of possession of a firearm by a serious violent felon for Lynum in Hamilton County. Lynum was transported to the Hamilton County Jail. He will be extradited to Kentucky.