You are at:Home»Current in Noblesville»Noblesville Community»Noblesville council hears introduction to Silo Ridge 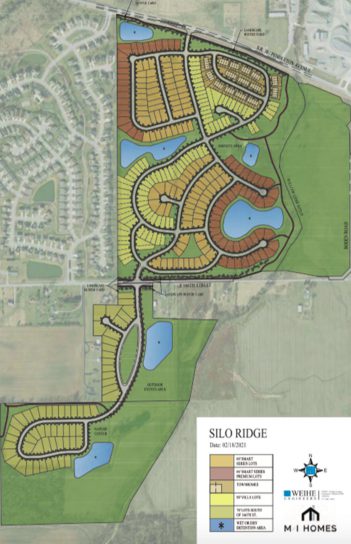 The concept plan for the proposed Silo Ridge. (Submitted image)

Attorney Steve Hardin presented a proposed mixed-residential development by M/I Homes called Silo Ridge to the Noblesville Common Council during its Feb. 23 meeting. It was only an introduction, so a vote wasn’t taken.

Hardin said Silo Ridge is proposed to be a gateway to the City of Noblesville because it is near Finch Creek Park, a 200-acre park that opened last year.

The project would have two single-family home areas, for-sale townhomes and paired villas, and 1 mile of paved trails, 6 miles of sidewalk and connection opportunities to adjacent neighborhoods. The paired villas are targeted for empty nesters and estimated to cost between $230,000 and $290,000. The single-family homes, depending on which section of the development they are in, would range from $260,000 to $340,000 or $340,000 to $420,000. The for-sale townhomes would be along Ind. 32 across from the area’s industrial uses and are expected to range between $220,000 and $260,000.

The council did not ask questions following the introduction.

What happened: The Noblesville Common Council unanimously approved an ordinance authorizing the issuance of economic development revenue bonds for the Nexus project.

What happened: The council unanimously approved changes to the city’s animal ordinance.