Senior Logan Wagner has known for years that Zionsville Community High School has never had a state wrestling champion.

In fact, the program had only two state finalists prior to 2021. The last one to reach the championship round was his uncle, Shane Wagner, who was the state runner-up at 160 pounds in 1997. 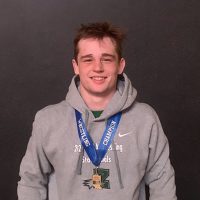 In the semifinals, Wagner (38-1) avenged his only loss this season by edging Avon’s Jaden Reynolds, 3-2.

“It’s been a dream of mine since I was very young,” Wagner said. “I’ve always been around the program growing up. I’ve had a lot of great examples. Being able to climb the podium and finish on top was really a great feeling for me.”

Wagner had wrestled Watson twice before and won by three points each time.

“He took me down twice. It wasn’t how I was expecting the match to go, but I was able to stay calm and finish the match pretty well,” said Wagner, who will wrestle at Marion University next season.

Wagner’s father, Robert, was a ZCHS wrestler and has been an assistant coach for more than two decades.

“I’ve been wrestling pretty much since I could walk,” Logan Wagner said.

“It’s cool to be the first one to do it,” Wagner said of winning state. “The younger kids can look at that and realize anything is possible as long as you work hard. Hopefully, we’ll have a few more state champs here in the future.”

Wagner finished eighth in the state at 120 pounds as a freshman, sixth at 126 as a sophomore and  and sixth at 138 as a junior.

“He comes from a family of hard workers who support each other,” Welch said.  “He was doing the right things, training hard, even throughout quarantine. He stayed committed and it paid off for him.”