You are at:Home»Current in Geist»Geist Cover Stories»Aligning planets: Bowen Technovations helps develop planetariums around the world

It seemed in the stars that Mark Trotter would come to work for Bowen Technovation.

Trotter was a planetarium director at the Louisiana Nature Center in New Orleans and was a client of Bowen Technovation in Indianapolis.

“He was looking for a project manager that knew planetariums, and that’s our core business,” Trotter said.

“I’d never been to Indianapolis before I took the job here,” Trotter said. 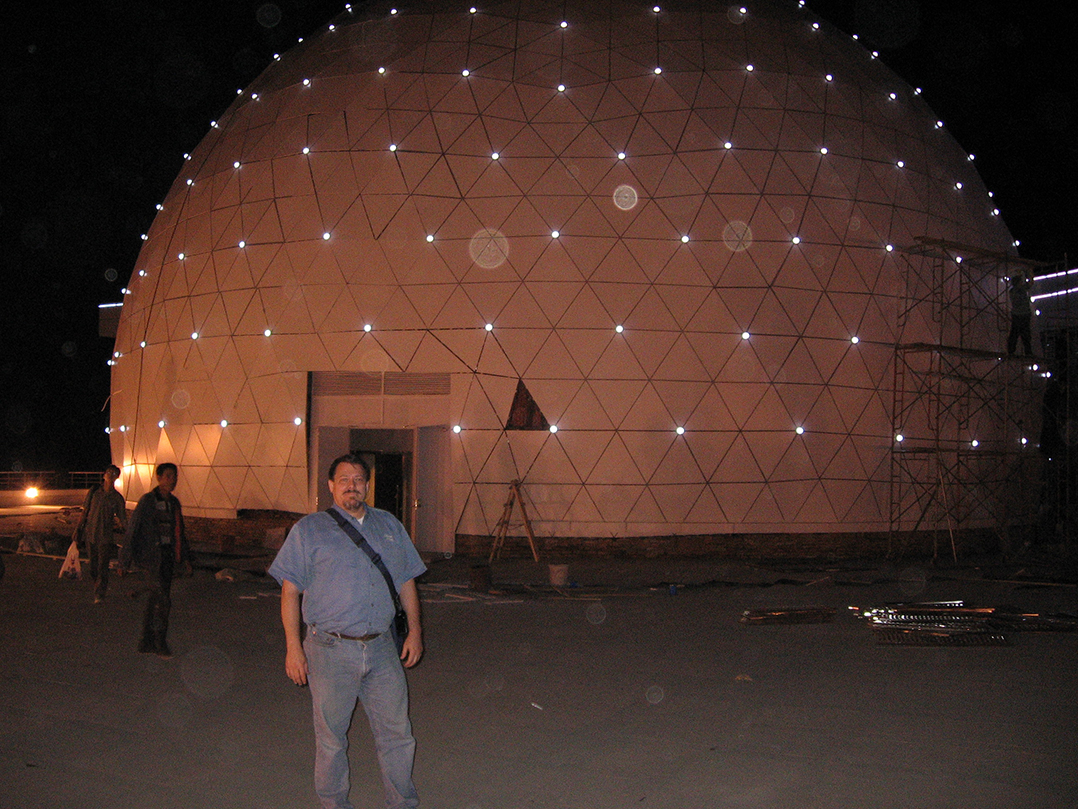 Trotter, a senior project manager, said although the company has clients around the world, most people in Indianapolis aren’t aware of the company.

John Barry, an Indianapolis resident, purchased the company from Jeff Bowen, who retired, in early 2020.

“I owned a construction supply company,” Barry said. “I sold that and was looking for another opportunity. It’s construction, science, history all wrapped into one, so it piqued my interest and we were able to come to a mutual agreement right before the pandemic (in mid-March 2020).”

Barry said Bowen Technovation didn’t have much going for three months after the pandemic caused a shutdown. It then had one project in Virginia in the summer of 2020. After Labor Day, business picked up.

“We’re busy as can be again,” Barry said.  “The bidding process never slowed down much.”

The company did some work on Butler University’s Holcomb Observatory and Planetarium in the past several months,

“We did some interactive work in the lobby of Holcomb Observatory,” Trotter said.

“We do lots of custom work for our clients,” Trotter said. “I have a client in Santa Ana, California, that I’ve been doing renovation work and maintenance for 17 years. These aren’t one-off projects. These are returning customers, so we’re proud they value expertise in the field to keep their facilities updated and running.”

Trotter said Grand Universe, a space center planned for Westfield, is a focus.

“Hopefully, that will come to fruition since I live in Westfield and I have a personal interest and professional interest in planetariums,” Trotter said. “It’s something we’d like to see not just for Westfield but central Indiana. We’re in the loop on the project. It’s something this area needs because there is no public planetarium open on a regular basis.”

In light of the large population base around in Indianapolis, Trotter it’s hard to find another area of similar size that does not have a public planetarium observatory.

Trotter was the director of Louisiana Nature Center for 14 years. Prior to that, he operated the planetarium in his hometown of Shreveport, La., for 10 years.

A mechanical engineering major when he attended Louisiana Tech, Trotter took some astronomy classes in college.

“I’ve always been interested in space and astronomy as a child,” he said. “I volunteered at Louisiana Tech’s planetarium and became a student worker there. Eventually, I took over as the director when the professor who ran the planetarium retired. They didn’t have anyone to take his place, and I said, ‘I know how to run this place.’ That started my planetarium career. It wasn’t a career goal originally but I enjoyed it so much that here I am.”

One unique project Bowen Technovation assisted on in late 2020 was the basement of the old Dallas police headquarters, where nightclub owner Jack Ruby shot Lee Harvey Oswald after Oswald was charged in the assassination of President John F. Kennedy.

“They’re making that museum and we did all the lighting and the sound for the exhibit designer on that project,” Bowen owner John Barry said. “There are prison cells and lineup rooms. They recreated that.”

However, it is not yet open to the public. eventually, Barry said the museum might partner with the Sixth Floor Museum, the former Texas School Book Depository where it is alleged Oswald shot Kennedy.