You are at:Home»Current in Westfield»Westfield Community»Westfield siblings set up fishing scholarship in father’s name 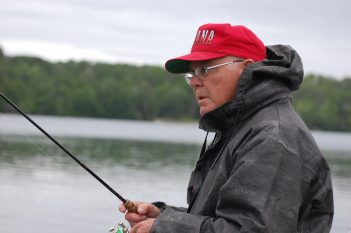 Carl M. Steele, who died in 2020, was an avid fisherman. (Submitted photo)

Carl Steele loved to fish and had a deep appreciation for Westfield Washington Schools.

So, when Steele died at age 85 in December 2020, his children Mike Steele, Becky Drlik and Joel Steele decided to create a legacy scholarship through the Westfield Education Foundation. The Carl M. Steele Memorial Scholarship is available for a Westfield High School junior or senior who demonstrates a financial need, is a B/C-grade student and an active member of the WHS Fishing Club.

“Fishing was a source of relief and peace for my dad and I couldn’t think of better way to honor him,” Becky said. “He loved spending time on a lake or ocean casting for the next big fish. We are honored to be able to have this opportunity to help a student that has an interest in the great outdoors and enjoy casting for their next big fish, be it on a lake or in life.”

Mike graduated from WHS in 1984, Becky in ’86 and Joel in ’91. All three still live in Westfield. Their mother, Linda Steele, was supportive of their plans. Carl Steele, who moved to Westfield in 1967, had served on the Westfield Washington Schools committee.

Mike coached football with WHS Fishing Club sponsor Eric Bland at Westfield Middle School. Knowing Mike was an outdoorsman, Bland reached out to see if he knew anyone wanting to volunteer to be a captain and take kids fishing.

Mike, who was elected to the Westfield Washington Schools Board of Trustees in November 2020, took some of the fishing club members out on his father’s boat the first few times. After that boat was sold, he took them out on his own boat.

“We give some fishing club poles to kids that can’t afford it and the scholarship can help pay for entry fees or help kids to get started,” said Mike, an Indianapolis firefighter who has previously coached and served as a WWS substitute teacher.

Joel said his father was a lifelong outdoorsman.

“Fishing was one of his passions,” Joel said. “Dad loved helping kids that needed help, and this is one way to do it.”

The two scholarships per year are for $150 each.

“We’ve had a lot of people donate to the cause and have been more than charitable with the money and everything else,” Mike said.