Zionsville Community High School sophomore swimmer Will Modglin has gotten stronger in the past year, thanks to his two older brothers. 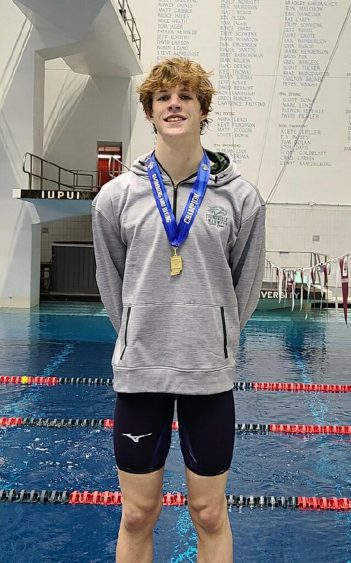 “I grew a lot more with my muscles,” Modglin said. “During the quarantine, my brothers and I would weight lift together. They pushed me a lot more. They usually were the ones wanting to go work out the most. I was usually the one sitting on the couch, watching TV and playing video games.”

Eagles coach Scott Kubly said that was a big plus.

“Having three months off due to the COVID outbreak in the end probably helped him, as I think he came back more refreshed,” Kubly said. “He worked hard all season long and was rewarded for that hard work with two state championships.”

Modglin captured the 200-yard individual medley in 1:45.14 and the 100 backstroke in 46.60 seconds Feb. 27 in the state finals at the Indiana University Natatorium at IUPUI.

“Will had a great state meet,” Kubly said. “Winning both his events were goals he had set early in the season. He also set new school records in both events.”

As a freshman, Modglin was second in 100 backstroke and 10th in the 100 freestyle.

“Backstroke is my favorite because it’s probably my best event,” Modglin said. “I like all the different skills it uses. I used my underwater (moves) a lot more than any other race.

Zionsville finished third in the standings with 189.5 points. Fishers was second with 198.5 points and Carmel won with 360.

Modglin was on two second-place relay teams. He was joined on the 200 medley relay team with junior Jack Donovan, junior Charlie Krone and sophomore Gabe Barry. On 400 freestyle relay team, he was teamed with Krone, Donovan and sophomore Will Raches.

Modglin said they were encouraged all the relay members are returning. Modglin said the thing that pleased him most was the team’s third-place finish.

Modglin said the team had a lot of ground to make up because Fishers earned 37 points in the diving competition while Zionsville didn’t have any divers in the finals.

“We really tried to get after it for the finals because we knew it we had a chance for the runner-up spot,” Modglin said. “It’s really awesome because the whole team swam its hearts out at finals.”