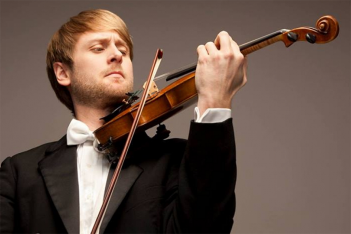 Nearly a year to the day that violinist virtuoso Zachary DePue was scheduled to make his Carmel Symphony Orchestra debut, he will finally take the stage.

During rehearsals, the COVID-19 pandemic struck, and the March 14, 2020 concert was one of many canceled.

So, DePue will be a guest artist when CSO performs at 7:30 p.m. March 13 at the Palladium at The Center for the Performing Arts in Carmel. A live audience of more than 400 will be permitted, allowing for social distancing among the 1,600 seats. A livestream also will be available.

DePue, an Indianapolis resident known for his high-energy performance, is well known to central Indiana audiences, having served 11 seasons as concertmaster with the Indianapolis Symphony Orchestra. He also is a founding member of the ISO’s first ensemble-in-residence, the international sensation Time for Three, with whom he performed for 15 years. Since leaving the ISO in 2018, he has been a guest concertmaster and performer.

“Just everything you can imagine until the pandemic hit. Now I’m just a grocery shopper,” said DePue, somewhat jokingly. “I was able to perform with my Indianapolis Quartet (Feb. 21), a string quartet. It was actually one of the first live audiences I played in front of for a year.”

DePue will be the featured soloist on Antonio Vivaldi’s “The Four Seasons” in the concert.

“I love playing it,” DePue said. “I’ve done it several times with the Indianapolis Symphony. I’ve done it in many different scenarios. It’s a very famous war horse of classical music. There are so many recognizable melodies and material in ‘The Four Seasons.’ Familiarity helps. Especially in these times as people start coming back to the concert hall, there is something they recognize.

“I’ve heard from a lot of people who have supported me through the years that are excited to hear me do my thing again in this setting.”

“Zach is such an incredibly gifted musician,” Hymes said. “He’s a natural talent. I’m over the moon he’s going to be a soloist for us.”

Hymes said “Four Seasons” has been featured in more than 100 movies and TV shows, and she can’t think of a program that would be better for bringing the orchestra back.

Hymes said 32 members of the orchestra will be performing to allow for social distancing. The last time that many orchestra members could play together was November 2020, when the December livestream had to be limited.

“I’m excited and optimistic about the future and the fact we can have live performances again,” Hymes said. “We’ll still wear our masks and be careful, but the fact we can bring back our orchestra to the Palladium, we are very relieved and the more excited.”

Eight dancers from Gregory Hancock Dance Theatre will perform during the “Winter” concerto, the movement of the Vavaldi piece.

“I saw their choreography and they are enchanting, and they are terrific,” Hymes said. “We love to collaborate.”

The second part of the concert will include Franz Schubert’s “Symphony No. 5 D. 485 in B-flat Major.”

“He wrote it when was 19 and he was in a very (Wolfgang Amadeus) Mozart mode,” Hymes said. “He was reveling in the genius of Mozart. This is a piece that sounds like Mozart with a twist. That year when he was 19, he wrote 200 pieces, and this is one of them. It’s very ebullient and upbeat. This shows the whole orchestra because Vivaldi is only for strings.”