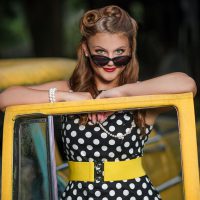 Hamilton Southeastern High School senior Audrey Caron was delighted when she learned “Little Women” was on the school’s theater schedule.

“This story is a classic and I am so excited we get to put it on stage,” Caron said. “So many people know this story and have been buzzing with excitement to see the show since it was announced we’d be doing it.”

Caron is part of the Hamilton Southeastern Thespian Troupe 520, which presents the play at 7 p.m. March 11-13

Caron plays Jo Marsh in the play by Kate Hamill, adapted from the novel by Louisa May Alcott.

“Jo Marsh is such a genuine character that faces challenges that are relevant in our society today,” Caron said. “She’s an imaginative soul with big dreams and doesn’t want to live the life that society tells her to. I love her spunkiness and bravery. Jo resonates with a lot of people, which puts a lot of pressure on me. A lot of people have a perfect idea of what Jo should be and I think that is the main challenge I face. I want to portray Jo in my own way while still being the Jo everyone knows and loves.

“I’m beyond excited to face these challenges, though. I can’t wait to give her justice and life on stage.”

Director Ethan Mathias said the production is a new adaptation of the novel.

“We are one of the first theater groups in the state of Indiana to produce this particular adaptation,” Mathias said. “Hamill provides a fresh, modern perspective on a familiar story with a uniquely theatrical script that sounds modern while remaining faithful to the classic story. Because it is so new, it’s been an especially exciting collaborative and explorative process to put this show together.”

Visit HSEDrama.org to purchase a ticket to stream the performance.