You are at:Home»Current in Carmel»Carmel Community»Grateful to be recovering, Carmel man recounts ‘the worst feeling in the world’ battling COVID-19 despair
Clarification: This story has been updated to clarify Dan McFeely’s job title as a communications and economic development consultant for the City of Carmel and other companies.

Dan McFeely spent Thanksgiving 2020 isolated in a hospital, but it was among the times he’s felt the most grateful in his entire life.

The 56-year-old Carmel resident had been battling COVID-19 for a couple of weeks at that point, and only days before had languished in despair as he struggled to breathe, his lungs seeming not to respond to the oxygen being forced into them by machines and the limited medicinal treatments available. 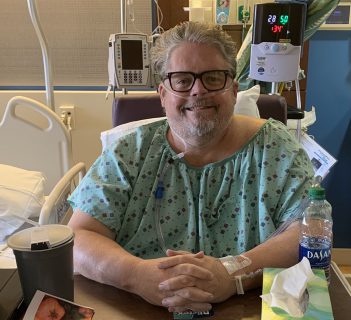 Dan McFeely posted this photo to Facebook on Thanksgiving 2020 to let his friends know that he was battling COVID-19 but on the road to recovery. (Submitted photo)

“I definitely thought that there was a good chance I was not going to be able to come home,” McFeely said. “That was probably the worst feeling in the world.”

Doctors told McFeely they’d continue their course of treatment for one more day before moving him to the intensive care unit for intubation, which to McFeely felt like a death sentence. But shortly before he was to be moved, his oxygen levels began to reverse.

So as he continued his recovery all alone at Ascension St. Vincent hospital in Carmel on Thanksgiving, he felt immensely grateful for his new lease on life and the medical team and advances that helped make it possible.

“(COVID-19) is something to fear because it’s very serious, but it isn’t something that can’t be overcome. It’s not a death sentence right away because our doctors know what they’re doing now,” he said. “That doesn’t mean everyone is successful at beating it, but I think the odds are better today than they were a year ago.” 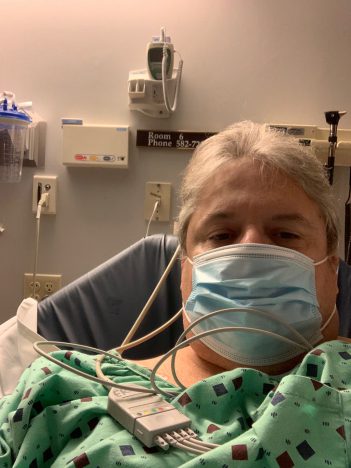 Dan McFeely on his first night in the hospital battling COVID-19 on Nov. 17, 2020. (Submitted photo)

McFeely can’t know for sure when or where he contracted COVID-19, but he suspects it happened on Nov. 3, 2020, which was Election Day.

As a precinct committeeman he spent a long day at his polling site, arriving at 5 a.m. and not leaving until 6 p.m., when he headed to the Hamilton County courthouse to await election results. He said he and almost everyone who voted that day was wearing a face covering, but he believes he could have been exposed when removing his mask for short periods of time to better communicate or through frequent touching of high-contact surfaces and equipment.

A few days later he started developing symptoms of a cold, but as they worsened he began to think he might have the flu. So on Nov. 15 he went to Ascension St. Vincent, where doctors diagnosed him with pneumonia and administered a rapid COVID-19 test, which came back positive.

At that point doctors thought McFeely had made it through the worst of the disease, so they sent him home to rest and recover. However his breathing continued to worsen, and when a newly-purchased monitor showed his oxygen level at 71 two days later he was told to head straight back to the emergency room.

That began an 11-day stay at the hospital, with doctors trying everything they could to boost McFeely’s oxygen levels. It wasn’t working, and it appeared more drastic measures would be necessary.

But about a week later, McFeely was much improved and heading home. 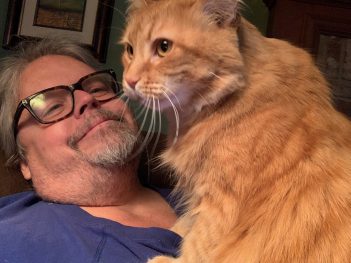 Dan McFeely was eager to reunite with his cat, Votto, after being released from the hospital. (Submitted photo)

No one knows exactly what led to McFeely’s turnaround and why that doesn’t happen for other COVID-19 patients. Or why some people with the disease remain completely asymptomatic while others suffer little more than mild symptoms and a loss of taste and smell, as was the case with McFeely’s wife, Sue.

But now, four months after the ordeal began, one thing McFeely knows for sure is that he is still dealing with the effects of COVID-19. He still feels weaker than he used to, and he runs out of breath doing simple tasks, such as shopping for groceries and carrying them inside. When heavy snow fell last month, he didn’t even want to attempt to get out his snowblower and clear his driveway.

When a neighbor stepped up to handle the task, McFeely realized that — with COVID-19 affecting so many lives — there must be many others like him, struggling to manage common chores as they fight to regain full strength that may or may not return.

“It’s inspired me to think about how can we mobilize some people for next winter, or still yet this winter, who could be on guard to help out,” he said. “There’s got to be a lot of people like me who shovel or mow their own grass because they’ve always been able to do that, but this spring I don’t think I can mow my grass. I just don’t think I could handle it.”

McFeely, a communications and economic development consultant for the City of Carmel and other companies, is considering ways to set up a program for those facing a long road to recovery to reach out to neighbors when they have needs, but in the meantime he wants to encourage the community to keep taking COVID-19 precautions seriously and to not lose hope.

“COVID is definitely something you can survive, but I wouldn’t mess around with it,” he said. “The minute you feel you’ve got some symptoms, get yourself to the ER and let them check you out.”