Fishers High School senior Margaret DeLong has been waiting for this role in “The Addams Family” for a long time.

“This was actually one of my favorite musicals and Wednesday Addams was one of my dream roles,” she said. 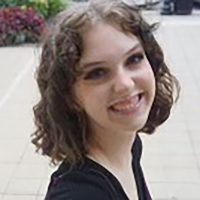 She had to wait a year longer when Fishers High School’s production of a musical comedy based on the 1960s TV show was canceled in March of 2020 because of the COVID-19 pandemic. The performances are at 7 p.m. March 26 and 27.

DeLong was cast as Wednesday last year and gets another opportunity. With some performers graduating, some roles had to be recast.

“I really love how spunky and powerful she is,” DeLong said of Wednesday. “She never takes no for an answer. The hardest thing about playing Wednesday is juxtaposing the darkness and newfound light within her since she is going through a bit of a personality change.”

Seating will be limited to 150 people per performance, but there will be a streaming option for those shows. There also will be a recorded option at 4 p.m. March 28.

“The students are doing a great job embracing the challenges of staging a production during COVID,” said Anna Nickell, the director. “We are happy to be able to work together, and it almost feels like something normal in this very abnormal time.”

The performers will be masked during the shows.