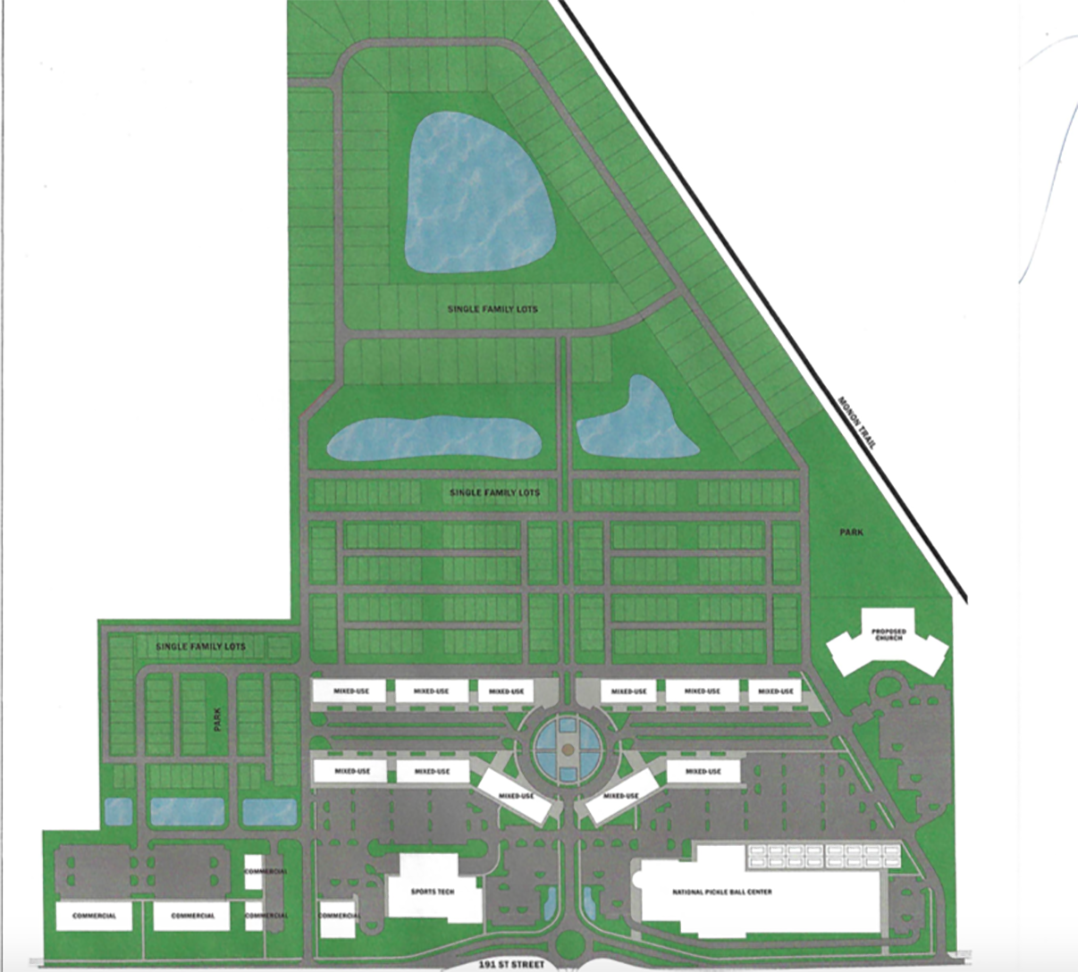 The project is a rezone of approximately 157 acres at the northwest quadrant of 191st Street and the Monon Trail. It consists of several different single-family areas, a church, a park, mixed-use areas, commercial areas, a sports tech building and an indoor racquetball facility. Council member Scott Frei asked for Dalton to elaborate on the sports tech company.

“The employer is currently in Speedway and one of their sponsors is a very large tech firm based in Fishers,” Dalton said. “They are looking for a new corporate headquarters and their combined operations have 100 employees with an average salary of $100,000.”

Some of the concerns from the council included average home sale prices and traffic on 191st Street.

“I don’t think this project is the highest and best use for that land,” council president Mike Johns said. “I look around Grand Park and see homes all developed on the west side, and the north side is about half developed, so when I look at this property, I see a beautiful piece of property and I’m concerned with putting more high-density housing up there.”

Johns also said he was concerned with the retail properties planned for the area.

Mayor Andy Cook responded to Johns’ comments and said Hamilton County Tourism tracked Grand Park visitors to see where they spent their off time, and the No. 1 destination during off hours was Clay Terrace.
“A lot of them went to the retail stores in the Clay Terrace area,” Cook said. “We have a very unusual retail demand in Westfield beyond a typical city of 40,000 because we have 2 million additional visits to Grand Park from all over the country. It’s a very different environment for retailers.”

“Our response to traffic from development has always been the statement ‘you give us a traffic challenge, and we will solve it,’” Cook said.

Council members Scott Willis and Jake Gilbert both spoke about their positive thoughts with the project.

“We have nothing around Grand Park, folks,” Willis said. “We need development to happen around this park, and I think this is a good complement to what we’re looking for. We need to crack that ice. I’m tired of looking at Grand Park and seeing nothing but fields around. It is supposed to be an economic driver.”

Gilbert said during the 10 years he’s lived in Westfield, he’s heard many residents question where the Grand Park developments are.

“That’s why I thought this would be an easy yes,” he said. “I don’t understand what we would hold out for that’s supposed to be better. I’m excited to see some development out there.”

The council approved the project 5-2, with Johns and council member Cindy Spoljaric voting against the project.