You are at:Home»Current in Carmel»Carmel Community»Carmel student learns about national politics as delegate to U.S. Senate Youth Program

Passed as a Senate Resolution in 1962 as a bipartisan effort to educate youth about the political process, the USSYP typically invites students to tour Washington, D.C., for networking opportunities and to gain political experience. Because of the COVID-19 pandemic, however, this year’s event was held virtually from March 14 to 17. 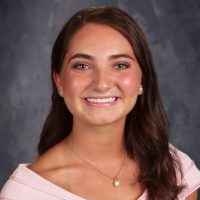 Despite the virtual format, LaReau, a Carmel resident, was thankful for her experience, which included listening to speakers like CBS news anchor Nora O’Donnell and U.S. Supreme Court Associate Justice Clarence Thomas, among other notable speakers. Each day, delegates debriefed with their mentors and attended keynote presentations, with ample time to join Zoom rooms to meet other students and mentors and seek career advice.

Initially, LaReau worried about not being able to form close relationships with other delegates, but that proved not to be the case. She is now confident that she will meet her peers in person in the future.

“What makes any event interesting is getting to interact with people who have different perspectives,” LaReau said.

Although she had concerns about potential ideological clashes, her concerns were unfounded.

“We had the most respectful discussions, and I realized the true value in listening,” LaReau said. “(The ideas) may not have necessarily changed my views, but I was flexible and humble enough to listen and understand where they were coming from.”

Through the USSYP, LaReau reinforced her belief that there needs to be an increase in diversity within Congress and the government, with leadership that not only reflects the constituency of the nation but also has a variety of career backgrounds and majors as well.

“Knowing I was on a Zoom call with 103 other delegates and that I will continue to build relationships with them is awesome,” LaReau said.

In the future, she plans to attend the United States Military Academy to study engineering. She then plans to serve in the Army and spend a career in public service.