You are at:Home»Current in Westfield»Westfield Community»Westfield graduate wins NCAA track crown for UIndy

University of Indianapolis runner Lauren Bailey made the most of her second chance.

The 2017 Westfield High School graduate won the 5,000 meters with a meet-record time of 16:03.98 March 12 in the NCAA Division II Indoor Track and Field Championships in Birmingham, Ala. 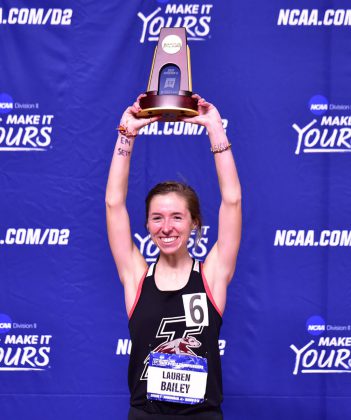 “Going into the race, I knew I had the top time and that was pretty exciting,” Bailey said. “I remember going into it a year ago in the exact same position and having the top time.”

Approximately 24 hours before her race last year, the pandemic shut the meet down in March 2020.

“It was cool to have the opportunity again and be in the same position,” she said. “My coaches and I talked and we decided I race best when I take it out hard and don’t look back.”

So, her strategy was to get out front early and stay there.

“If anybody wants to come with me, they are going to have to work for it,” Bailey said. “I knew the girl behind me (West Texas A&M’s Florence Uwajeneza) was hanging on to me for a while. My coach (Brad Robinson) also told me if anyone goes with you, keep pressing on that gas pedal. That’s what I did.”

Bailey said after the 2020 disappointment, the victory was even more special.

“It’s savoring the moment that meets are so precious. We don’t get that many of them. We have to take advantage as much as possible,” said Bailey, who also placed fifth in the 3,000 meters in the indoor finals.

As a graduate transfer, Bailey will compete for the Notre Dame cross country and track and field teams in the 2021-22 season. She is seeking a master’s degree in nonprofit administration. She will graduate in May with a major in public health.

“I’ve had really great support from my future teammates,” Bailey said. “They were texting me after winning the race.”

After losing the entire outdoor season because of the COVID-19 pandemic, Bailey said this season is going to be more exciting for everyone.

Bailey arrived at UIndy as a middle distance running, competing in the 800 and 1,600 meters in high school. The coaches suggested she try the longer distances.

“I remember I ran 17:30s my first 5,000 meters race and I wasn’t too far off the school record,” she said. “I realized how much I enjoyed it the entire time. My coach said, ‘I think we found your event.’ I feel like my body accepts the training a little more. It makes my body feel more comfortable where the speed (training) can make me feel a little more tired. The distance (training) makes me stronger.”