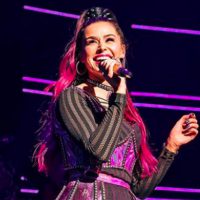 “As someone who grew up in the Midwest, I love that I can come back and teach kids who are passionate about Broadway,” Pauly said. “Discovering Broadway Inc. and central Indiana (residents) understand the importance of arts education.”

Kirk, a Carmel High School graduate, said he saw Pauly on Broadway in the new musical “SIX” during previews.

“I was preparing to attend the opening night as a guest of (producer) Kevin McCollum’s and March 12th (2020), that night, was the evening Broadway closed,” he said. “Samantha has a huge following in both the U.S. and the UK with her portrayal of Eva Perón in ‘Evita” on the West End.”

“SIX” is a musical about the wives of Henry VIII.

“First, I will teach a pop/rock audition course,” Pauly said. “We will focus on students bringing in their best pop/rock cut. I’ve found that young actors are terrified to sing stuff like this, but with shows like ‘SIX,’ ‘Jagged Little Pill,’ ‘Moulin Rouge’ and ‘& Juliet’ taking the theater by storm, it’s becoming vital that actors have pop/rock songs ready to go. Second, I will teach a dance routine from Broadway’s upcoming musical ‘SIX.’ Given that the show has yet to open on Broadway, this is a rare opportunity for an aspiring artist.”

The class at 9 a.m. is the “SIX” dance routine course. The 1 p.m. class is the pop/rock vocal course.

“Discovering Broadway Inc. serves two communities — central Indiana and Broadway,” Kirk said. “We want to be there for artists. Their work matters. Their craft matters. My goal is to be able to look back on the pandemic years from now and say that we did everything possible to serve our community by encouraging artists’ creativity.”