You are at:Home»Current in Fishers»Fishers Cover Stories»‘The whole family feels it’: Fishers fundraising for Gold Star Families Memorial to honor those affected by loss of a veteran 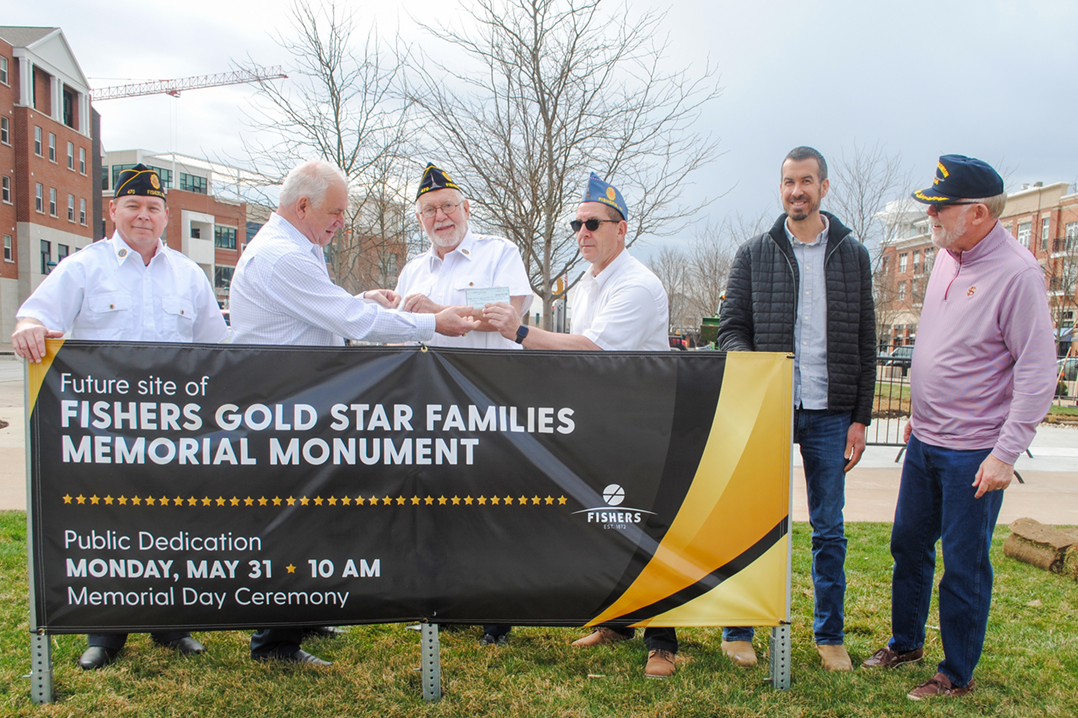 The City of Fishers has celebrated veterans for many years, conducting ceremonies for Veterans Day, Memorial Day and other veteran-related events, but council member Brad DeReamer said one thing the city has neglected to do is honor those who have lost a veteran.

That is changing with the installation of a Gold Star Memorial in front of City Hall, 1 Municipal Dr.

“We’ve neglected the people who were affected by the loss of a veteran,” DeReamer said. “The Woody Williams Foundation started the Gold Star Families Memorial Monument for all families, not just a mother or spouse but for brothers and sisters, daughters, friends, cousins.”

There are 79 Gold Star memorials in the United States with another 78 planned. So far, there are four in Indiana.

DeReamer and George Stavropoulos, a Fishers resident and Vietnam veteran who received four Purple Hearts and a Silver Star, approached Mayor Scott Fadness about installing a Gold Star Memorial in the city.

“(The mayor) said, ‘Great,’ so we put together a committee,” DeReamer said.

DeReamer, who previously served as the mayor of Greenfield, established a park for veterans in Greenfield. When he moved to Fishers, he realized there was already the Liberty Plaza honoring veterans. Then he learned about the Woody Williams Foundation and thought it would be appropriate if the city could have a Gold Star Families Memorial in Fishers.

“We (previously) really didn’t honor the survivors of the veterans, but they’re just as important because they have to deal with that death for the rest of their lives,” DeReamer said.

A rendering of the Gold Star Families Memorial Monument to be installed in Fishers. (Submitted photo)

The memorial will be dedicated on Memorial Day, May 31. Before then, the city wants to raise the $60,000 to complete the project. So far, it has raised approximately $30,000. It plans to raise all of the money by donations by Memorial Day.

“One way or another, the city will ensure this is a done deal,” Deputy Mayor Elliot Hultgren said.

Fishers resident and veteran El Ahlwardt said that when someone serves in the military, their whole family makes a sacrifice.

Before Gold Star Families, there was a Gold Star Moms recognition. But Ahlwardt said he was approached by the father of a veteran who was killed while serving and asked why there was no recognition for Gold Star Dads.

“I was literally asked at a Memorial Day ceremony, ‘What about me?’” Ahlwardt said. “‘I’m a Gold Star Dad,’ but there wasn’t a moment of, ‘Oh, no, we screwed up,’ it was a moment of conviction. A Gold Star Dad came up and he was grieving.”

That helped ignite the spark to invest in a Gold Star Families monument so all family members could have a memorial dedicated to them. Two benches also will be installed around the monument.

During the dedication, the city will recognize any Gold Star Families who wish to be recognized. For those who have lost a veteran during their service, contact Ahlwardt at el.ahlwardt@gmail.com.

The Woody Williams Foundation, based in Louisville, Ky., is a nonprofit responsible for promoting, creating and implementing Gold Star Families Memorial Monuments in communities across the United States.

“These efforts are focused to provide a space the Gold Star Families can call their own in honor of their loved ones and their family,” the website states.

The organization’s mission is “to honor, recognize, and serve Gold Star Families and the legacy of their Loved Ones who have paid the ultimate sacrifice.”