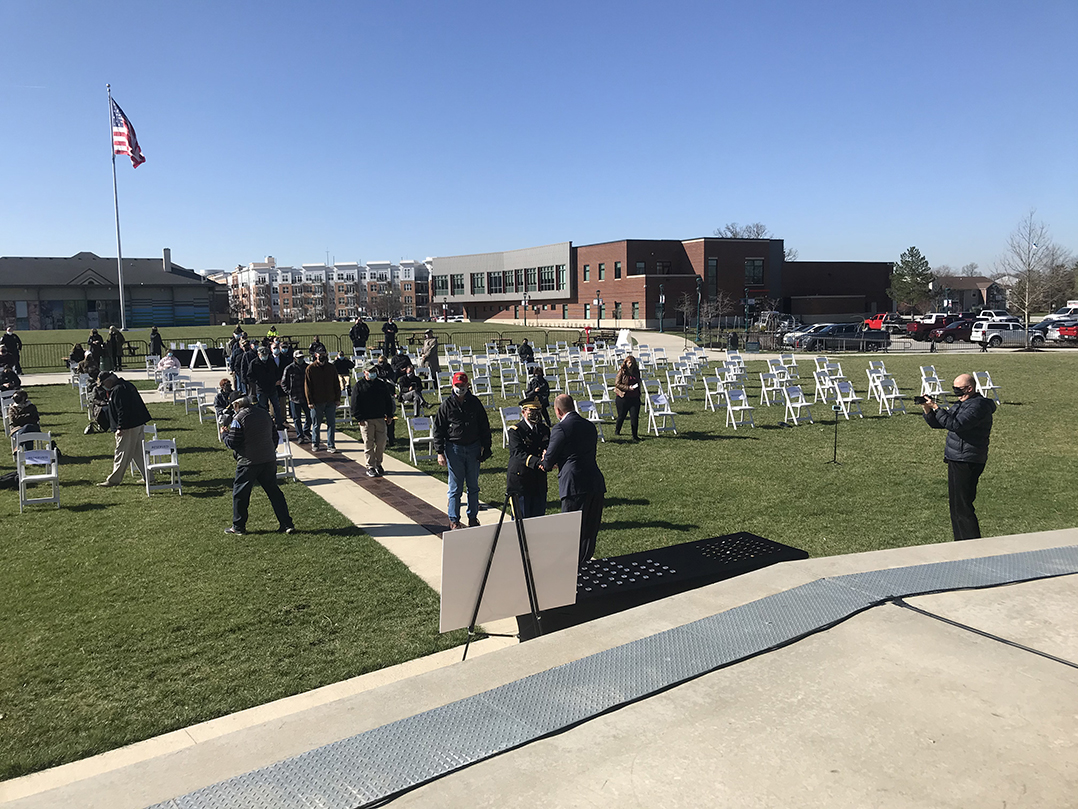 Retired Colonel Dan Palmer was one of a couple of dozen Vietnam veterans to receive a commemorative pin from Fishers mayor Scott Fadness. (Photo by Jonathan Matthes)

The White River Brass Troupe filled the open air on Fishers’ common green with patriotic tunes. “The Battle Hymn of the Republic” bled into “God bless the USA” and eventually into the themes from “Band of Brothers”, “The Pacific” and “Saving Private Ryan”. They weren’t just there to dust off their trumpets and trombones, but to provide the soundtrack for the city of Fishers commemoration of National Vietnam War Veterans Day, a thirteen year tribute of the 50th anniversary of the United States’ involvement in the Vietnam War.

“My commitment to you (Vietnam veterans),” said Mayor Scott Fadness “as it always is when we get together, is to continue to build upon the foundation we have already begun. First because you deserve it. Second, to inspire the next generation of civil servants.”

Fadness and Fishers empowered retired U.S. Naval Commander El Ahlwardt to spearhead their efforts in showing appreciation for America’s veterans who received so little when they returned from their time in combat. Ahlwardt emceed the event, that he worried might suffer a bout of the chills -“it was 28-degrees 8 o’clock this morning”- before transforming into a what he called a “Chamber of Commerce day”; cool but not cold, and not a cloud in the sky.

“For all of you Vietnam veterans hello and welcome home. You didn’t hear that often when you came back, but you’re going to hear it alot today and going forward from the city of Fishers.”

The dozens of veterans in attendance received more than just thank you’s from a podium, they were also bestowed golden pins with an eagle and the words “Vietnam War Veteran” across the front garnished by laurels. Fadness, in the place of the United States government, not the city of Fishers, presented them to the veterans in a solemn ceremony.

As the band played, and the veterans lined up before Fadness, Ahlwardt stood on the stage, but back out of the sun, soaking the scene in.

“Come over here Gary,” he motioned to Pastor Gary Stump who provided the invocation and benediction for the occasion, and Stump joined Ahlwardt to observe the veterans’ process forward. “This is what it’s all about.”