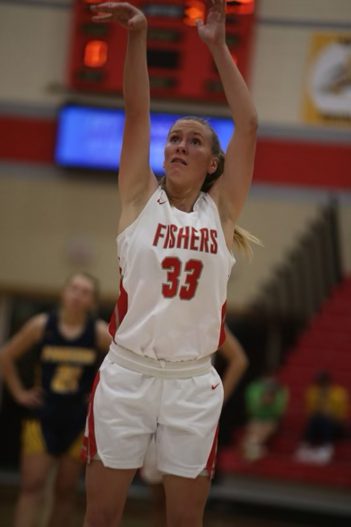 There were many times when Fishers High School coach Lauren Votaw had to tell Katie Burton it was time to put the basketball away.

“The kid spends more time in the gym than arguably any player I have ever coached,” Votaw said. “I’ve had to kick her out of the gym every single day because it’s time to get out of there because someone else needs the gym or because it’s time to get home and get off of your legs and rest. Katie works hard. She loves the game. She wants to be better for herself. She wants to be better for her team.”

“I’d always see all these high school players being All-Stars and thought I wanted to be that,” said Burton, who will play for St. John’s University next season. “So definitely when I was younger, it was a dream of mine to be an Indiana All-Star. It’s something I wanted to work for to be able to accomplish that.”

“I think any time you have a player that can shoot the ball that well, there has to be a little bit of natural talent,” Votaw said. “However, I believe in Katie’s case that most of that is hard work. Katie has not always been a great outside shooter. “

Burton was 1-of-11 on 3-point shots her freshman season. Her sophomore year she shot 33 percent from the 3-point range, followed by 38 percent as a junior and 36 percent as a senior.

“Her overall field goal percentage was pretty consistent at 45 or 46 percent for her first three years,” Votaw said. “Her two-point percentage was where we really saw an increase when she went from to 49 to 56 percent. I think that was a focus of Katie’s this year. She wanted to focus on being more consistent, being more reliable and making every shot count.”

Burton said she took better shots this past season.

“I was a lot more consistent with my shot,” she said. “I worked with shots off the dribble and with contact. My all-around finishing and all my shooting got a lot better.”

Burton was selected as a Junior All-Star last season, but the games were canceled because of the COVID-19 pandemic.

In the meantime, Burton is working on all parts of her game.

“I’m perfecting it anyway I can, trying to make that change from high school to college because it is going to be a change,” she said. “I’m just getting mentally ready for that. I’m just trying to get better at everything right now. Everything I did in high school has to be 10 times better for college in order to be a standout player.”