You are at:Home»Current in Zionsville»Zionsville Business Local»The Lemon Bar to reopen in May

The Lemon Bar, a Zionsville bakery and cafe that has been closed for nearly a year because of the COVID-19 pandemic, will reopen in May at an undetermined date, owner Kate Drury announced.

Along with many other businesses, The Lemon Bar, at 95 E. Pine St., closed when the pandemic began. The Lemon Bar briefly reopened in May 2020 before closing again the following month. Because of the long closure, Drury said many of the The Lemon Bar’s staff have found other jobs or chosen not to return for personal reasons. 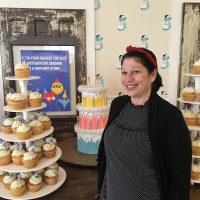 “The goal is to be open by Mother’s Day (May 9), but that is going to depend on if we are able to get everybody staffed and trained, because we are rehiring for all those positions,’ Drury said. “But we are getting in there over the next month and getting everything cleaned, ready, set up, restocked. The website is getting a refresher, etc. I just don’t have a drop-dead date because it’s going to depend as we get closer what things look like staffing-wise.”

“It’s been stressful, but I think we made the right decision,” Drury said. “It wasn’t safe for staff and certainly not customers, so we were just waiting for the municipalities to catch up and let us know what they thought we should do, because in May there was really no guidance. There were no masks. There really wasn’t anything.

“There was the national CDC (guidance), but there seemed to be a lack of knowing what to do locally. And I’m not a doctor, so I became increasingly aware it was going to be up to us to figure out what we wanted to do.”

Drury decided to close The Lemon Bar until the pandemic ended or until vaccines were widely available. Now that they are, she feels it is safe to reopen The Lemon Bar again. It will feature outdoor dining, and the space’s garage door will be lifted to allow open air flow, Drury said.

Anyone interested in applying for a job at The Lemon Bar can email Erickson at laura@thelemonbaronline.com.

“We are just super excited to see our customers,” Drury said. “It’s been a long time, and we are ready to serve them.”