The siblings rose from the lower-level Carmel Pups travel teams to key bench contributors as seniors for the CHS basketball state championship teams. 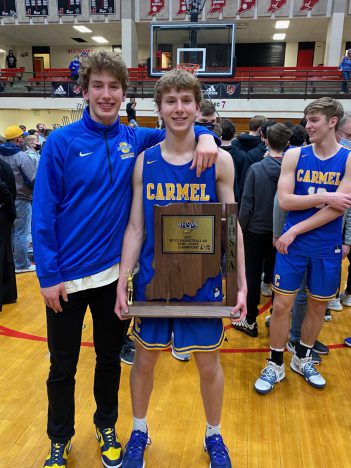 As a senior, Ben played on the 2019 Class 4A state champion team. On April 3, it was Nick’s turn as he played 11 minutes in Carmel’s 51-46 victory over Lawrence North in overtime at Bankers Life Fieldhouse.

“It’s incredible now we both have this memory,” Ben said. “It’s great to see, because when I was a senior, all these guys were on JV and now they are starting and contributing. It was awesome to see how they improved over the years.”

Ben played on the Pups C team as a fifth-grader and was on the D team as a sixth-grader.

“Back in elementary and middle school, it does get to you, even though you try to block that out,” Ben said. “It motivated me to work my hardest to achieve my goals, because I knew that at the end of the day, I was going to play varsity. I just had to get there. What I would say to kids that were in the same position as I was, you have a lot of time to grow both physically in your game and mentality. Don’t get discouraged about where you are at because a lot of kids will get satisfied, and you just have to keep working hard and definitely it can happen.”

Ben said a lot of kids who played on higher level Pups or AAU teams didn’t end up playing for CHS.

Nick was on the C team in fourth, fifth and sixth grade. He played on B teams in seventh and eighth grade at Clay Middle School. During his freshman year, he moved from the B to A team because the coach liked his work ethic.

“By county tournament I started for the freshman team, so that was a big improvement in my mental state because it took a toll on me being on the lower team every year,” Nick said. “I think I adopted the same mindset as Ben, and I saw him never get discouraged. That played a role in my life, having that role model as a brother.”

Although he averaged less than 2 points per game, Nick played in all 27 games for Carmel (26-2). He had some starts when 6-10 forward Charlie Williams was injured.

Nick plans to major in engineering in college but hasn’t made a decision on where he will attend.