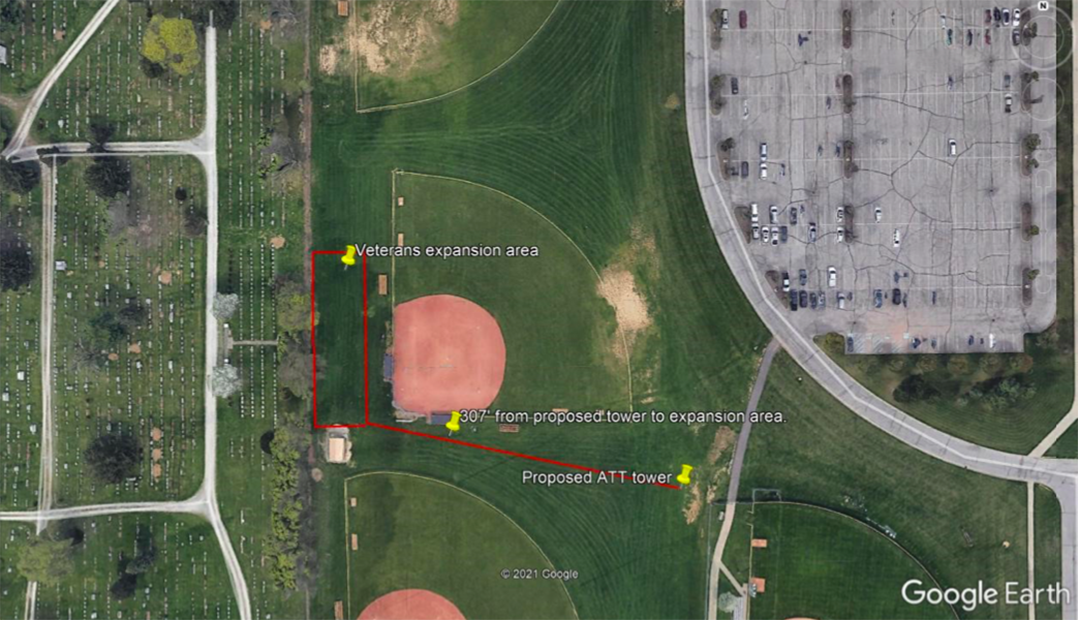 The Noblesville Common Council spent a lengthy portion of its April 13 meeting discussing a 199-foot monopole cell tower proposed to be built on Noblesville Schools’ property at the south side of Noblesville High School. The proposal was an introduction, so a vote wasn’t taken, But a vote is expected to be taken during the April 27 council meeting.

AT&T is proposing moving its existing cell tower at the Hamilton County Sheriff’s Office to the 50-foot by 50-foot spot on the school’ district’s property. The Noblesville Plan Commission forwarded the proposal to the council with a 6-2 unfavorable recommendation. Many of the concerns involved Crownland Cemetery at 1776 Monument St. and its desire to expand its military veterans’ section to a parcel it owns that is approximately 300 feet from the proposed tower. Crownland Cemetery leases the parcel to Noblesville Schools and there are softball fields on the property.

AT&T employee and petitioner Steve Rogers spoke at the meeting and said the tower is moving from the sheriff’s office because a lease agreement is coming to an end. By moving it to the new property, it could provide better cell service to the western side of downtown Noblesville.

Rogers addressed several concerns, such as construction equipment driving across gravesites during the construction.

“That’s not going to happen,” he said. “We don’t have the right to access the site using someone else’s property.”

Rogers also addressed a concern about noise disrupting funeral services. He said noise would not emit from the antennas. There would be potential noise from the HVAC units, but those only operate when the temperature is above 95 degrees, and the noise would be at 65 decibels or less at distance of 5 feet. Other potential noise would come from a back-up generator and maintenance equipment, but Rogers said AT&T would work with the cemetery to schedule maintenance visits when a funeral wasn’t occurring.

“The bottom line is, this is a technology people depend on, and that dependency is only increasing,” Rogers said. “People are relying to an ever-greater degree on this technology today, and we have to build our facilities more densely and closer to the user. That’s really difficult to do in a way that doesn’t have someone that’s upset about it.”

Noblesville Schools Supt. Beth Niedermeyer also spoke at the meeting. She asked the council for support, stating that the schools needed reliable and consistent wireless service.  She said the tower being placed near the cemetery was in no way disrespectful, as AT&T had proposed a flagpole design which would disguise the tower as a flagpole.

Matthew Cook, vice president of the Crownland Cemetery Association Board of Directors, requested the council deny the proposal.

“If you are a veteran in Hamilton County and you want one, you get a gravesite for free at Crownland Cemetery,” Cook said. “Just east of our existing wall is 10 acres we are temporarily leasing to the school, and for many years, it has been tasked to be the site of future expansion of (the) military section. Unfortunately, our military section is filling up. Vietnam-era veterans are getting into their 70s and 80s. We think it’s disrespectful to put a 20-story tower within a few feet of military gravesites.”