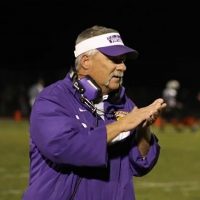 “It’s unbelievable, there’s no doubt,” said Baldwin, who retired in 2018 after 11 years as Guerin Catholic High School’s defensive backs coach. “I debated doing it (the GoFundMe campaign) for a week and finally said, ‘I’m going to do it and see what happens.’”

Baldwin, 63, didn’t want to leave his five adult children saddled with medical bills. He has been on family medical leave since Jan. 1 from his job of managing a warehouse on the east side of Indianapolis.

Testing started in October 2020, and Baldwin met his insurance deductible of $8,800 for 2020. He was eventually diagnosed with Stage 4 throat cancer. He already has met his deductible for 2021.

“Then not everything is covered 100 percent, so I’m still racking up more bills with treatment and drug charges,” he said. “So, it’s nearly $20,000. It just got overwhelming for me.”

The cancer began spreading from his lymph nodes to his larynx.

“When it went to my larynx, I couldn’t swallow food,” Baldwin said. “I lost 70 pounds before they got it under control. They put a feeding tube in me.” 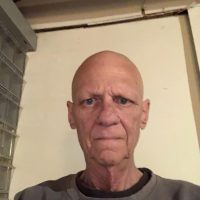 Baldwin’s weight dropped from 195 to 125 pounds. He has since added five pounds to his 6-foot frame. He is undergoing radiation treatment every day. He has chemotherapy once a week. He recently finished his third week of a seven-week process.

Baldwin had prostate cancer four years ago, but doctors don’t think that is a factor with his throat cancer. He previously was an assistant coach at Bishop Chatard for 16 years. He coached in Texas for a few years before moving to Indiana. He played football at Dulles High School in Sugar Land, Texas.

Several former players have reached out to him.

Baldwin said it is special that he “could have some effect on those young men helping mold them to become good fathers, good husbands and good friends.”