You are at:Home»Current in Carmel»Carmel Community»‘Slick’ Leonard remembered for toughness, kindness 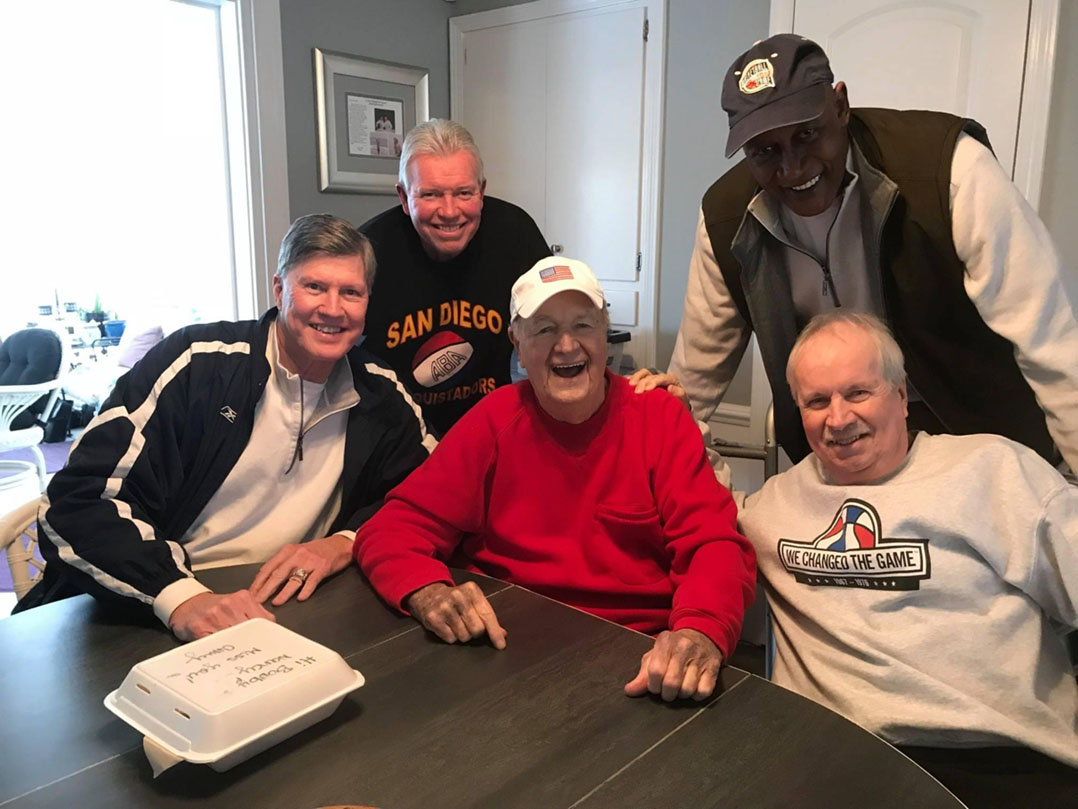 For years, Robin Miller has campaigned on Indianapolis radio shows for the Indiana Pacers to put a statue of Bobby “Slick” Leonard outside Bankers Life Fieldhouse.

“He put the Pacers on the map,” said Miller, who covers IndyCar for Racer.com.

Leonard, the legendary Pacers coach and broadcaster who lived with his wife, Nancy, in Carmel for decades, died April 13 at home.

“He lived like a wild man for 88 years and died in his sleep. He would laugh his (rear end) off about that,” said Miller, who first met Leonard when he was writing Pacers features for the Indianapolis Star when he was 19. “He went through a lot (health-wise) the last three years. He and A.J. Foyt are the two toughest (guys) who ever graced the face of the earth.”

Bob Netolicky, who played with the Pacers under Leonard, joked that maybe Leonard’s statue should have him holding a hockey stick. One time in Minnesota, Leonard found a hockey stick in the visiting locker room and chased Netolicky around with it.

Like Miller, Netolicky remained close to Leonard for more than 50 years, talking to him for the final time on April 11.

“He was a father figure to all of us,” said Netolicky, even though Leonard was only 10 years older than he was.

Netolicky said Leonard formed the Pacers into an unselfish team.

“We only cared about winning, and that was all instilled by old Slicko,” Netolicky said. “He was a great guy off the court. But as soon as he walked on the court, he changed like Dr. Jekyll and Mr. Hyde. He was all business. He’d do anything it took to win.”

“He was a master motivator,” Miller said. “He could read people better than anyone I’ve seen in sports. He knew basketball, but he knew people better.”

“He just loved to compete,” Shepherd said. “If you had him beat, it was hard to get out of there because he wanted to get even.”

Pacers radio play-by-play announcer Mark Boyle, who worked with Leonard for more than three decades, said early on he was taken on how people gravitated toward Leonard.

“He had a knack around people,” Boyle said. “The way he connected with people even on the broadcast. People would say, ‘I heard ‘Slick say this the other night. He’s the best.’”

“I laugh when I say that, because he did make me want to be a better person. I guess not enough that I ever did it,” Boyle said.

Boyle never saw an NBA game in person until he got the Pacers job in 1988.

“I knew the sport, but I didn’t know the NBA game, which is dramatically different than the amateur game,” Boyle said. “He didn’t have to go out of his way to teach me stuff. He was never intrusive. He never offered anything unless I asked, and when I did, he always made time for me. He went out of his way to help me acclimate and feel reasonably comfortable with the NBA game and people.”

“Yes, but a high-quality character,” Benner said. “His genuine caring of others — I will miss his hugs and kisses on the cheek — was unique and came genuinely from his heart. One of a kind? No doubt. Blessed to have had many good times with this wonderful man.”

Benner’s older brother, Bill, had known Leonard even longer. Bill was 5 years old when Leonard, an All-American guard, helped lead Indiana University to an NCAA championship in 1953. Leonard went on to play eight seasons in the NBA.

“Slick was my boyhood idol. That 1953 team was the first one I remember growing up because of my dad,” Bill said.

Bill served as the Pacers beat writer for the Indianapolis Star from 1974 to 1979.

“So, I had to get past the star-gazing with Slick,” Bill said. “Back then, the writers traveled commercial with the team. He earned his nickname Slick because of his prowess with gin rummy. He would invite me to play with him but instead of a penny a point, because I didn’t have professional basketball money, he’d play a half-penny a point. By the time we got to San Antonio or Denver or wherever, he still cleaned me out. I got there trying to figure out how I was going to pay him. He’d say, “That’s OK, Billy, just buy me a beer.’”

Without the Pacers’ ABA success and Leonard and wife, Nancy, spearheading a 1977 telethon to save the then-financially struggling team after the move to the NBA, Bill said Indianapolis’ sports landscape might be drastically different today.