You are at:Home»Current in Zionsville»Zionsville Cover Stories»Sunny times ahead?: Solar farm proposed in Boone County, concerning some Zionsville residents

A solar panel project proposed in Marion and Union townships in Boone County could bring renewable energy to the area, but some Zionsville residents fear it will negatively impact housing prices.

The solar panels would capture photovoltaic energy and convert it into direct current electricity, which would flow through inverters and be converted into alternating current electricity. Some of the energy would be stored in a battery system for later use. The rest would power homes and businesses.

Northern Indiana Public Service Co. plans to purchase energy created by the project, meaning the energy would stay in Indiana, Ally Sexton, NextEra’s lead developer on the project, said. The panels are designed to operate for at least 30 years, according to NextEra. The company often replaces aging solar panels with newer, more efficient technology to extend their lives, but if there is no longer a demand for a project after 30 years, the company will often decommission a project, according to the company’s website.

“Energy that we use every day, it has to be developed somewhere,” Sexton said. “Every one of us goes to turn on a light switch at the beginning of the day, and we expect the energy to be there. Solar projects like Brickyard are providing that energy and contributing to the electrical load that each and every one of us use, and this project is doing it in a way that is not emitting any carbon byproducts. It’s from a clean and renewable source.”

NextEra officials say the estimated $210 million project would supplement other forms of energy.

NextEra officials expect the project to create approximately 200 jobs for the area during construction and generate between $12.5 and $14.5 million in additional tax revenue within Marion Township and between $30.5 and $35.3 million in the Union/Zionsville rural taxing district during the next 30 years. In total, they estimate the project will create up to $50 million in additional tax revenue for Boone County during that time.

Some Zionsville residents, however, say the project would be an eyesore and negatively affect housing prices, thus outweighing potential benefits of the project.

Jess Rivercomb, a Zionsville resident who lives next to the proposed project site, said the prices of homes in the area would significantly decrease if the project is approved and solar panels dot the area.

“That means my kids get to look out their windows at a solar farm instead of beautiful fields,” Rivercomb said. “There’s no way you can say my home will go up in value. These homes in Zionsville literally sell in a day to three days when they go on the market. There is no way if, say, my house is worth (one price) right now that when there is a big solar farm out there I’m going to be able to sell it for (that). I’m taking a hit, and that’s not fair. That’s not fair to me and my family.”

NextEra officials say studies show solar projects will likely not negatively affect home values and that some studies show solar projects can potentially have a positive impact on adjoining property values. For example, a 2018 property value impact study by CohnReznick, which included an examination of four solar projects in Indiana, indicated “no consistent negative impact has occurred to adjacent property that could be attributed to proximity to the adjacent solar farm.” The impact study included data from solar projects in Portage, Frankton, Valparaiso and a suburban area in Indianapolis, the largest of which was on a 56-acre parcel of land.

But Rivercomb and Dan Brownlee, another Zionsville resident who lives near the project, argue no studies have been conducted in an affluent area like Zionsville. They said Zionsville is one of the most affluent places in the state and nearly any other Indiana location’s housing prices will be less expensive and generate less demand, meaning a solar project’s effect on them can’t be compared to studies that have not been conducted in similar areas.

“My property value is going to decrease,” Brownlee said. “They can’t convince me otherwise. I’ve looked at different studies, and those studies are much smaller developments – 50- to 100-acre fields versus (more than 1,000) acres. And they are in economically less affluent neighborhoods. So, by nature, any type of development is going to increase those property values, where if you look at across the street from this (project), it’s a much different scenario.” 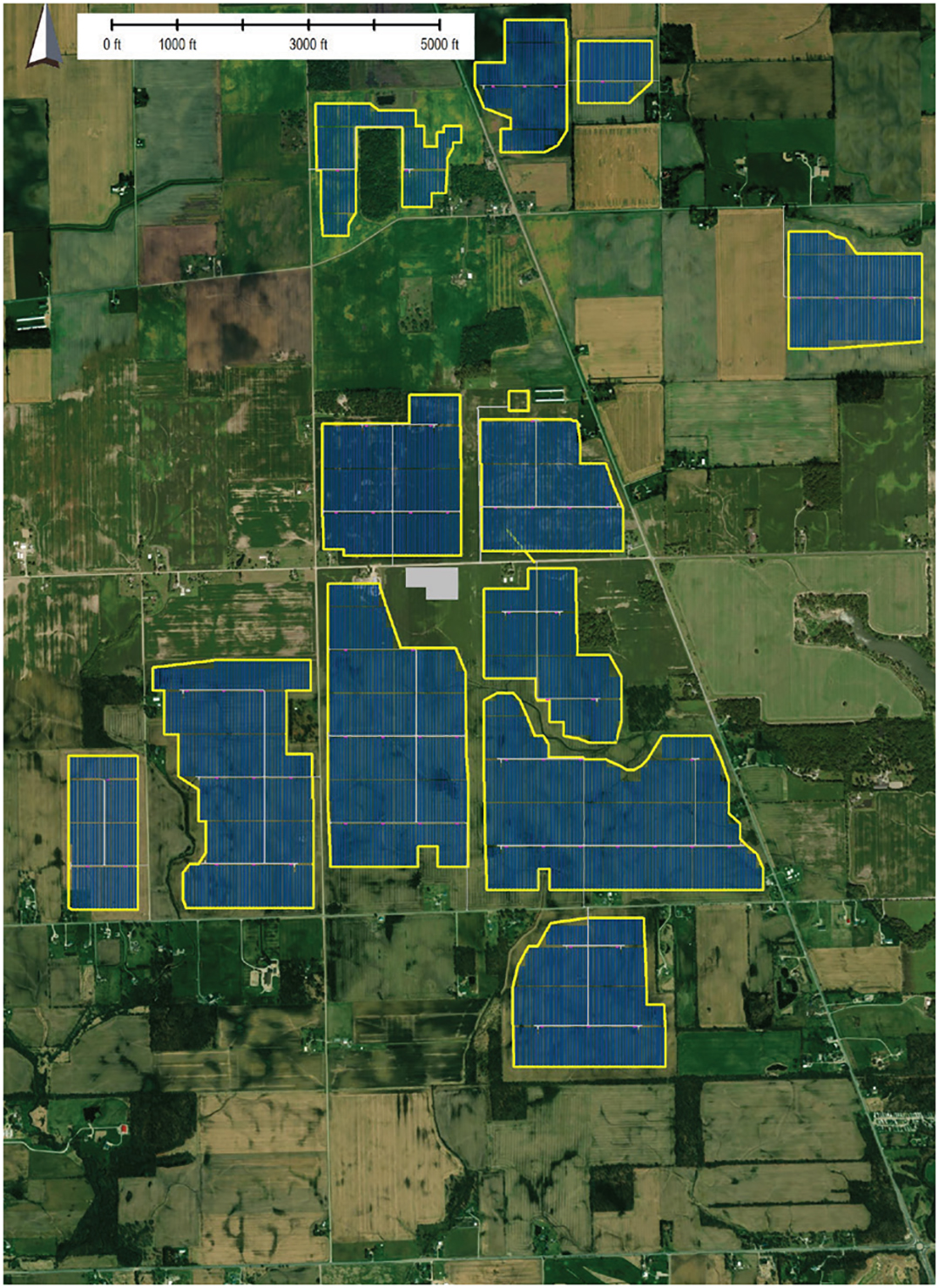 A proposed NextEra solar project in Boone County would be near U.S. 421. (Rendering courtesy of NextEra.)

Before it can be approved, the Brickyard Solar project must go before multiple local entities. NextEra officials held an information session at the Boone County 4-H Fairgrounds April 15, marking the first formal step.

The first portion of the project that must be approved by the county and would go before the Boone County Area Planning Commission, Boone County Commissioner Donnie Lawson said.

“We are looking to go through the permitting hearings, which would be through two jurisdictions — Boone County and The Town of Zionsville,” Sexton said.

Boone County Commissioner Donnie Lawson said many aspects of the project need to be considered.

“How does it affect everyone and everyone in the county? Those are the things you have to look at with all of this,” Lawson said. “It might be a really great project, but what does it do to the land values around it and the houses and all that? I’m looking at bigger things. I’m not saying it’s wrong, but I’m not saying it’s right, either. You have to look at these kinds of things. What’s the economics of it? What’s it going to do for the county? What’s it going to do for all the residents here – the good, the bad and the ugly?”