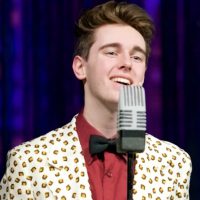 “One thing I love about playing Adam is how confident the character is,” Jones said. “He steals the stage and other characters just know when he is on stage. Adam is definitely my favorite role I have had at HSE and probably my biggest.’”

“Freaky Friday” is a new musical based on the novel by Mary Rodgers and the Disney films of the same name.
“It has a catchy, pop-rock score with lots of comedy and heart,” said HSE theater teacher Ethan Mathias, who is directing the musical. “When we announced the show, many students were surprised to learn that the movie had been turned into a musical. At a time when so much of our world feels upside down, there is something comforting and encouraging in spending a few hours sharing a story about a stressed-out family able to work through a seismic shift in their lives.”
Audiences can stream the show at 7 p.m. April 30 and May 1 and at 2 p.m. May 2. There is a limited number of in-person tickets available.
Jones said his favorite number is “Go,” and it involves nearly the whole cast.
“Adam is hosting ‘The Hunt’ where this high school goes on a huge scavenger hunt through the city,” Jones said. “I get to sing to the other students and give them clues for this grand scavenger hunt.” 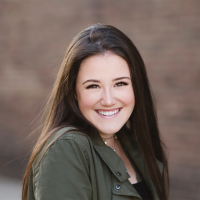 Anna Cushman plays Ellie, the daughter who switches bodies with her mother.

“I say the most difficult thing about playing Ellie is keeping myself organized,” Cushman said “I always have to be thinking one step ahead, so I always know where I am supposed to be, what lines i need to be thinking about, and what song I’m about to sing. The role reversal is very fun but a lot more difficult than I expected. Physical characterization is so important for a role reversal like this one, so I have spent a lot of time working with my scene partner, Lillian Offenbacher, to make sure the switch is as believable as possible.”
Cushman said she loves the opening number, “Just One Day.
“It’s catchy, fun to sing, and i really enjoy the blocking that goes with it,” she said. “I am so grateful for this opportunity to have to role in my last musical. I adore being on stage and playing a role as special as Ellie is something so exciting and a great part to end on.”
Audrey Waite is serving as a student director for the third time this school year.
“I have really enjoyed getting to know the ins and outs of theater in a way I never had before,” Waite said. “Getting to see the detail-oriented process directors go through to make shows happen is really fascinating, especially since I get to be part of some discussions as I gain more experience. A rehearsal hardly passes where I don’t sit with a director and throw ideas at a wall until something works, and I absolutely love that. It’s the perfect environment for me.”
Mathias’ wife, Devan Mathias, is the costume designer and assistant director. Other members of the team are Brent Marty, vocal director; Laura Beck, technical director; and Elizabeth Pike, choreographer.
For more, visit hsedrama.org/tickets.