You are at:Home»Current in Carmel»Carmel Cover Stories»Wander with wonder: Carmel High School junior’s music-themed design to kick off series of Monon tunnel murals

Last time Carmel Clay Parks & Recreation partnered with student artists, it resulted in a mosaic turtle called “Bootsie” that greeted Monon Greenway users in the center of town. Inclement weather led to its destruction, leaving it “broken in a thousand pieces,” according to 2006 park board minutes.

Fifteen years later, CCPR is partnering with student artists again, and they plan to go bigger than a single reptilian mosaic.

CCPR is working with Carmel High School students to design and paint murals inside the four Monon Greenway pedestrian tunnels, with prep work well under way for the first one at City Center Drive. CHS junior Caroline Hammonds created the winning design, which features musical elements within an Indiana sunset.

The tunnel, which is near the Center for the Performing Arts, closed in mid-April for repair work and to prepare the surfaces for the mural. CHS Art Dept. Chair Jen Bubp said several students will spend a week painting it in June.

“Out of this strange, bizarre COVID school year, this is the icing on the cake, a beautiful moment that has come out of a really strange experience for our high school students,” Bubp said. 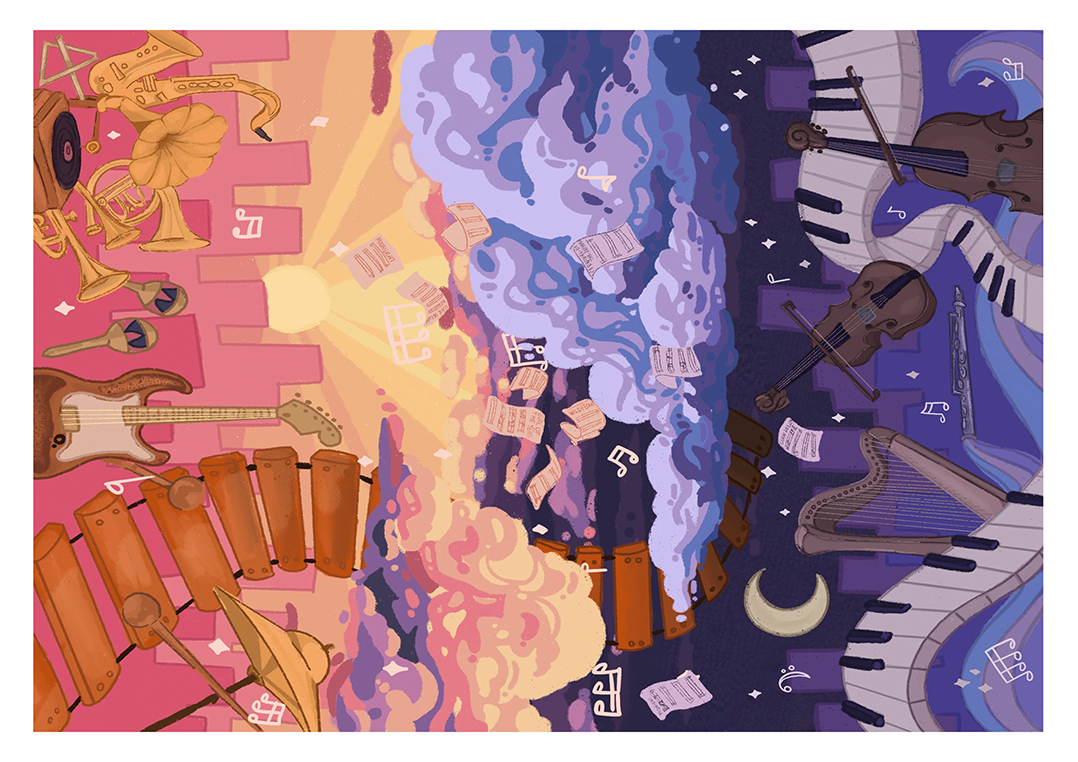 The partnership began when City of Carmel officials reached out to CCPR Director Michael Klitzing to see if they’d be interested in working with students to revitalize the Monon tunnels. CCPR is responsible for maintaining the trail.

Bubp said she was eager for CHS to be involved and asked National Art Honor Society students to submit designs. She said Hammonds’ work stood out as soon as the art teacher saw it.

“I looked at it and I knew, this is the one,” Bubp said. “It was no surprise to me. (Hammonds) is a joy to work with. She’s very dedicated, she’s committed and she’s put hours into this design already.”

But Bubp had one major concern. With the tunnel being nearly 90 feet long and 10 feet high, not only would it be difficult to scale a design to that size but painting the ceiling could be dangerous for students.

However, a chance encounter at a coffee shop allayed those fears. Bubp struck up a conversation with John-Michael Polley, a 2009 CHS graduate and owner of O.N.E. Consulting LLC. His firm had the resources and experience for these types of projects, having helped coordinate large-scale art projects elsewhere.

Polley, a Westfield resident, tapped Jordan Elsey, art director at EMI Graphix in Speedway, to work with Hammonds and Bubp to vectorize the design, a digital process that allows it to be scaled to any size. Then, the design will be printed on material to be placed on the ceiling and walls of the tunnel, with the mural installed in full on the ceiling and heights above 7 feet. Color will be removed at a reachable height for students to paint by hand.

“The way we’re going about this mural is definitely new, but the functionality of it is perfect for a paint-by-number event,” Elsey said. “It’s basically a giant coloring book that’s printed out on a big scale.”

Hammonds, who plans to pursue a career in graphic design or marketing, said she was speechless when she learned that Carmel’s Public Art Advisory Committee had selected her design.

“It’s so exciting,” she said. “Not many people get the opportunity to leave that kind of mark on their community.”

Hammonds said she listened to classical music and the song “Girl of the Year” by musical duo Beach House as she created the design. She said she was inspired to capture the beauty in a state that doesn’t have natural wonders such as mountains and oceans.

“A lot of people are like, ‘This is a flat state. It’s boring here,’ but there are a lot of really pretty things that people overlook, like the sunsets and the wildflowers,” she said. “The wildflowers and the sunsets are my favorite parts of (the design), so I thought I’d incorporate something that I really love into it.”

Hammonds said she hopes those who use the tunnel feel a sense of wonder and get lost in thought when they see her design.

Klitzing said he expects the artwork to last for decades, and he hopes it will inspire the students who work on it to take pride in their community for years to come, including Hammond.

“I’m pretty excited that Caroline’s vision is the park department’s first foray post-turtle into arts,” he said. “I can’t think of a more well-deserving student to be able to lead us through this.”

Carmel Clay Parks & Recreation plans to work with Carmel High School students to design and paint murals on Monon Trail tunnels at City Center Drive, 116th Street, I-465 and U.S. 31. Each tunnel is planned to have a theme that ties into the surrounding area.

CCPR Director Michael Klitzing said he is aiming to have one tunnel painted each year. He said the 116th Street tunnel will be next because it will likely be a more complicated process than the other two tunnels because they are under roads owned by INDOT.