You are at:Home»Night & Day»Entertainment News»Crutchfield to make Beef & Boards debut in ’Smoke on the Mountain’

Laurel Crutchfield is not only making her Beef & Boards Dinner Theatre debut, she also is performing in the Indianapolis area for the first time in12 years.

“Last show I was in in the Indianapolis area was senior year of high school at North Central, back in 2009,” Crutchfield said. 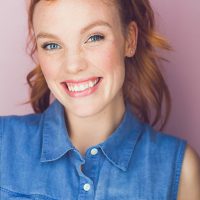 “I love that the show is written so well,” Crutchfield said. “I don’t have to do anything to make it funny, so it’s awesome to have such freedom. It’s also a fun challenge to play violin while singing, which I haven’t gotten to do much in the past and I do almost the whole show. The show is truly just funny on its own.”

The show is about the first “Saturday Night Gospel Sing” at a country church in North Carolina’s Smoky Mountains. The bluegrass songs are played by the quirky Sanders family, a traveling group that is returning to performing after a five-year hiatus.

“I love dancing, so ‘Christian Cowboy’ and ‘I’ll Live a Million Years’ are fun,” Crutchfield said. “And ‘Blood Medley’ is a blast because I get to have a violin solo.  We haven’t rehearsed it yet, but I love the song ‘I’ll Fly Away’ already, so I’m sure that will be amazing.”

Crutchfield earned her degree in general studies and a certificate in journalism from Indiana University, with minors in music, Spanish and history. After living mostly in Los Angeles and New York, she returned to earn her master’s in music education and choral/instrumental K-12 teaching certificates in June of 2020. She has worked at Bach to Rock in Carmel since July 2020.