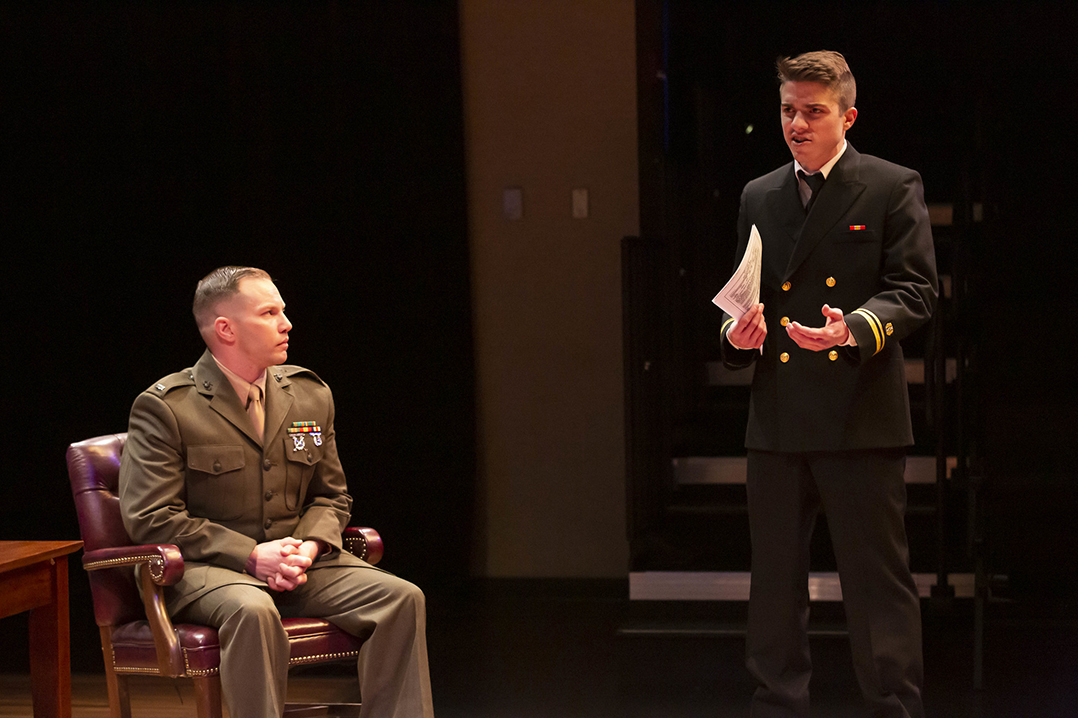 A few hours before opening night of Civic Theatre’s production of “A Few Good Men” on March 13, 2020, the curtain dropped on the play because of a shutdown caused by the COVID-19 pandemic.

Now, more than a year later, the play returns with Carmel resident Matt Kraft in a leading role of Lt. Daniel Kaffee, a Navy lawyer. “A Few Good Men” runs May 7-22 at the Studio Theater at the Center for the Performing Arts in Carmel.

“I think one of the biggest challenges of this role is just memorizing the sheer amount of dialogue my character has, but that’s the best problem I could ever ask for,” said Kraft, a 2009 Carmel High School graduate. “(Playwright) Aaron Sorkin writes incredibly sharp dialogue, so it’s a ton of fun to get to use it in this play. I started going over the script and the lines again about three weeks before rehearsal. It’s actually cool coming back to this story a year later because I see pieces now that I missed the first time.”

The play is about the trial of two Marines charged with complicity in the death of a fellow marine. The play was made into a 1992 movie.

“I am so glad to have the chance to finish what we started with this show,” Kraft said. “Everyone at the theater is so fun to hang out with at rehearsal every day, and I can’t wait for audiences to finally see this.”

Kraft performed in “Pride and Prejudice” at Civic Theatre in February. Kraft is confident “A Few Good Men” can succeed because of all the challenges involved with juggling that show.

“It’s like, ‘Hey, if we can do a Jane Austen adaptation with English accents, masks and basically no live audience, we can definitely do ‘A Few Good Men,’” Kraft said.

“We were given about a month to rehearse, and with a few new faces in the cast, there was some work to do,” Scoble said. “For me, personally, it took about a week to get my lines back. My character, however, never really went away. He rattled around my subconscious for over a year, hopeful that we would get another chance to perform, and here we are.”

Scoble said there are some new considerations as a result of the pandemic.

“Mostly in terms of spacing and distancing and such, but we are working through them, almost effortlessly, without diminishing the integrity of the story,” Scoble said. “I would be remiss if I didn’t acknowledge and commend Civic leadership and our director, John Goodson, for how they’ve handled these circumstances.”

Scoble’s character is that of a military tough guy.

“On the surface, he seems very one-dimensional,” Scoble said. “To some degree, his tough-guy persona is simply an extension of his commanding officer, Col. Jessup. I believe there is a bit more to him than just that — a bright, articulate, commanding leader with more than a handful of misappropriated, God-fearing tendencies. I have found him to be a relatively dynamic character to portray.”

Scoble performed in the summer of 2020 in a light-hearted Shakespeare abridged show for Indy Bard Fest.

“With the cancellation of all indoor events, the concept was to bring theater to the community in outdoor spaces, which at the time was deemed safe,” Scoble said. “We managed to book 15 shows all over the state of Indiana from August to October, and although a bit non-traditional, it was very well received and considered a huge success. We were even able to stream the show live online in October, which was then still a novel concept in the community theater space – a production I won’t soon forget.”