You are at:Home»Night & Day»Entertainment News»Westfield Playhouse’s ’Silent Sky’ presents love story on and off the stage

“Silent Sky” is the true story of female astronomer Henrietta Swan Leavitt, a pioneer in the early 1900s.

At its heart, it’s also a love story. 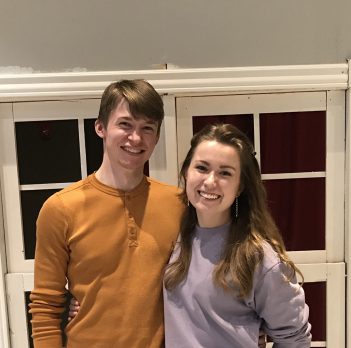 That makes the role of playing Henrietta easier for Dani Gibbs as her husband, Nick Gibbs, plays her love interest, Peter Shaw.

“There is a lot of trust there already,” Dani said. “We really can focus on the lines and what is going on in the scenes instead of worrying what he is thinking.”

The Carmel couple will make their Main Street Productions debut in “Silent Sky” May 6-16 at Westfield Playhouse, 220 N. Union St.

“We can definitely anticipate each other (on stage),” Nick said.

The couple, who married in January 2020, met while playing opposite each other in a play at Hillsdale (Mich.) College. This is the first time they have acted together since then.

Dani said she researched the show when a different theater was staging it.

“I read through it and fallen in love with the idea of it,” Dani said. “The playwright (Lauren Gunderson) is fantastic. I’ve enjoyed some of her other works. I’m not a mathematician or anything, but I’ve always enjoyed space and stars.”

Nick was cast in “A Few Good Men” at Civic Theatre on March 13, 2020, when the play was shut down a few hours before opening night because of the COVID-19 pandemic. The show has been rescheduled to start May 7, but Nick opted to act with his wife.

“It was an opportunity I really couldn’t pass up,” Nick said.

Dani has performed in “Mamma Mia!” and “Elf” at Civic Theatre.

Fishers resident Max McCreary is directing at Westfield Playhouse for the first time.

“The cast has been doing a phenomenal job and I’m thrilled with their progress so far,” said McCreary, who is on faculty at Roots’ School of Theatre in Fishers. “For me, ‘Silent Sky’ is about a love story in every sense of the work. Henrietta’s love for science, principally, and also the love she feels for her sister, Margaret, and a romance with a research fellow and professor at Harvard, Peter Shaw.”

McCreary has worked with Gunderson’s plays before and admires her work.

“It’s been terrific to get my hands on this particular story and show it to folks now,” McCreary said. “Given the year that everyone has had, it’s good to welcome back to the public to see something as heart-warming and uplifting as this play is.”

Greg McCauley, founder and president and CEO of Westfield’s Grand Universe, and his staff will bring two telescopes to do some stargazing after each evening show.

McCauley will set up the telescopes when the show is over.

“We’ve done stargazing events all over Indiana for the last 10 years and have a variety of high-end, research-grade, robotic telescopes that we can control by our smartphones to track objects in the night sky,” McCauley said. “This play being about a young female (astronomer) from Harvard and the discovery she made with things called Cepheid variables (variable stars), I think it will be a great supplement to have telescopes up at night.”