The thing Carmel High School senior Ellie Sanchez likes most about her role in “Mamma Mia!” also is the thing that makes it the most challenging. 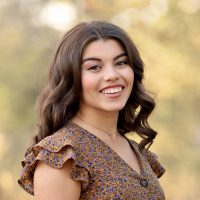 “My favorite part about this role is getting to play the character at such a pivotal, coming-of-age point in her life, and getting to work through all the revelations and high-intensity emotions that she experiences during this time,” Sanchez said. “(But) this is the very same thing that makes the role difficult, because I’m not yet old enough to have had the experiences that Sophie has in the musical in my own life. This musical is definitely a favorite of mine. It has some hilarious characters, and I already love ABBA music.”

Sanchez said her favorite song from “Mamma Mia!” is “Voulez-Vouz” because it’s so high energy.

After missing out on last year’s school musical because of the COVID-19 pandemic, Sanchez said she has a greater appreciation for the ability to put on a production during a pandemic,

“I treasure every moment that we get to spend together as a cast, even during long, grueling days of rehearsal,” said Sanchez, who will attend Brigham Young University in the fall.

“There are not really a lot of challenges to the role,” Scott said. “It is different to relate to a 40-, 50-year-old, but I enjoy playing around with his awkwardness.”

The end of the show closes with a dynamic number called “Mega Mix.”

“It is really fun to sing the iconic songs and wear cool costumes,” said Scott, who plans to major in arts management at Indiana University in the fall. “I enjoy more of a classic musical such as those written by Stephen Sondheim, but this jukebox musical is growing on me. It has been a pretty tough year, but I am glad I am closing out my senior year with such a fun musical.”

The audience is limited to 750 because of gathering restrictions.

“We’re all very excited to open it up to a bigger audience and allow people to experience live shows again,” director Anna DeBard said. “The show is so fun, and the students are having a blast.”