Jared Washburn put himself on a timetable to become an Eagle Scout.

“By Jared’s 11th birthday, he had earned his Arrow of Light award and was getting ready to move into Boy Scouts. He was looking forward to working with the Troop 576 Scoutmaster, his dad, and all the other boys he had known from Cub Scouts,” said Lisa Washburn, his mother. “Then, life thew a curveball.” 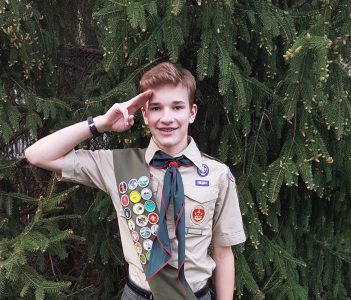 Carmel’s Troop 576 had been chartered through The Church of Jesus Christ of Latter-day Saints, the church Jared’s family attends. But just as Jared became eligible to enroll, the worldwide church announced in 2018 that it was ending its century-old relationship with Boy Scouts of America. As of Jan. 1, 2020, Troop 576 would be disbanded. Jared had 18 months to complete his Eagle Scout requirements.

“With the help of many leaders and coaches, and especially his Scoutmaster dad, he earned his merit badges, filled leadership roles and spent over 20 nights camping,” Lisa said.

In November 2019, Jared completed his Eagle Project alongside 20 of his Scouting friends. The group installed a 16-foot shade sail at Edison School of the Arts in Indianapolis. The sail provides protection for the school’s chicken coop as well as shade for children during recess.

With his project complete, Jared joined Troop 132 in Carmel. 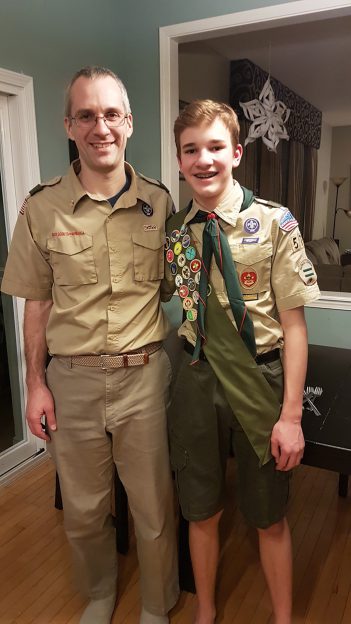 “With their help, he completed his final eight days of leadership service and began the process of submitting his paperwork to the district,” Lisa said.

Then the COVID-19 pandemic hit in March 2020. Despite some delays, Jared, now 13, passed his board of review Feb. 4. He received his Eagle badge May 1 at the Court of Honor ceremony at St. Christopher’s Episcopal Church in Carmel.

The Carmel Middle School eighth-grader followed in his father’s footsteps to become an Eagle Scout at a young age. Adam Washburn earned his Eagle Scout rank at age 15 in Bolingbrook, Ill. In 2019, the average age for youth obtaining the Eagle Scout rank was 17.3 years.

Jared was nearly done with everything at 12 1/2 years old, but changing troops and the pandemic slowed the process. He said the experience provided lessons in patience and flexibility.

“I had to get my information like merit badges, dates of my board of reviews for previous ranks and personal information switched over, and it was really stretched out, because the coronavirus stopped in-person meetings, therefore slowing communications a lot,” Jared said. “After I got everything switched over, I still had the actual work for my Eagle application to do.”

Jared said he enjoys Scouting because it’s a challenge.

“It’s pushed me out of my comfort zone, especially with joining a new troop where I only had one or two friends in it and practically everything worked differently,” he said. “I’ve learned to communicate with other people, and I’ve had to make more phone calls and send more emails to other people than I’ve done for everything else in my life combined. I had to take responsibility and figured out what I needed to get done, who to interact with to do that and how quickly I would need to get it done.”