Hotel Carmichael and the City of Carmel invite the community to celebrate the grand opening of Feinstein’s at Hotel Carmichael, central Indiana’s newest entertainment club inside the new boutique hotel at Carmel City Center. 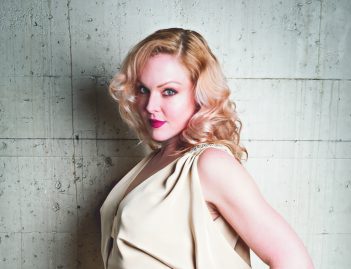 Storm Large will appear at Feinstein’s for three performances. (Photo by Laura Domela)

The opening will feature four days of music by Emmy- and Grammy-nominated performer Michael Feinstein, who owns and operates similar clubs in New York and California, and nationally known singer, songwriter and actress Storm Large of Pink Martini fame.

“We are so excited to celebrate the grand opening of this fabulous and timeless supper club that will provide Carmel residents and visitors with a chance to experience the sounds of the American Songbook, brought to life by Michael Feinstein and some of the nation’s top performers,” Carmel Mayor Jim Brainard said. “This club is an integral part of the Hotel Carmichael, which is inspired by the Songbook throughout and helps solidify Carmel’s status as the best place to embrace the era of the world’s greatest music.”

Feinstein’s is on the lower level of Hotel Carmichael. It is billed as an upscale dinner cabaret where visitors and hotel guests can experience classic dining in a creative and inspiring space, sophisticated ambiance and lively entertainment. The intimate venue features 150 seats, but due to COVID restrictions, only 75 will be available for the shows. Each seat has a view of the stage and includes a private dining area available for small gatherings and corporate outings.

“Like we do with our clubs in Manhattan, California and San Francisco, our goal is to bring to life the Great American Songbook on stage and it is perhaps most appropriate to do this in Carmel, where the American Songbook Foundation is headquartered,” stated Feinstein, founder of the Great American Songbook Foundation. “Here in Carmel, we strive to continue building our collection of musical archives from the 1920s through the ‘60s and beyond – the music we grew up with and the culture that has had such a powerful influence on music and performers today.”

From recordings that have earned him five Grammy Award nominations to his Emmy-nominated PBS TV specials, his acclaimed NPR series and concerts spanning the globe – in addition to his appearances at iconic venues such as the White House, Buckingham Palace, Hollywood Bowl, Carnegie Hall and Sydney Opera House – his work as an educator and archivist defines Feinstein as an important musical force.

Here is the preliminary schedule of events at the Hotel Carmichael:

Storm Large of Pink Martini fame will take the stage for two nights of entertainment at 7:30 p.m.

Michael Feinstein and Storm Large will join together for a special show on stage, celebrating the greatest songs of the Songbook era at 6 p.m.